KUCHING: Tan Sri Adenan Satem (pic) has defended his decision not to proceed with a motion on reclaiming Sarawak's equal partner status, saying this can be resolved amicably with the Federal Government.

The Chief Minister said many had asked why a resolution on the matter was not tabled in the state assembly.

"The state government is not making a U-turn on this matter because we believe that the Federal and state Barisan Nasional governments, being a family, can resolve this issue amicably.

"Diplomacy is better than confrontation," he told the state assembly in his winding-up speech on Wednesday.

As such, Adenan said the state government was not going ahead with a motion on the amended Article 1(2) of the Federal Constitution which categorised Sarawak as one of 13 states in Malaysia.

He said Article 1(2), before its amendment in 1976, clearly provided that Malaysia consisted of (a) the states of the Federation of Malaya, (b) the states of Sabah and Sarawak and (c) Singapore.

"The amended Article 1(2) is perceived as not in the spirit of the Inter-Governmental Committee Report and the Malaysia Agreement which was clearly reflected in the original wording of that Article," he said.

He also said Prime Minister Datuk Seri Najib Tun Razak had announced his willingness to discuss any misinterpretation or misunderstanding of the Malaysia Agreement 1963 and to find solutions to resolve the issue.

The consultation approach, he added, was manifested in Najib's regular visits to Sarawak and his approval of many projects for the state, including the Pan-Borneo highway.

"In reciprocating the kind-heartedness and generosity of the Prime Minister, I would like to express our thanks to him and the Federal Government for approving these people-centric and rural-focused projects during his walkabouts in Sarawak," Adenan said. 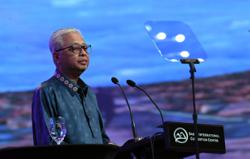