70-year-old cheated of RM120,000 after falling for lottery ticket scam

BATU PAHAT: A syndicate made up of locals and foreigners has been preying on senior citizens in the Batu Pahat area by using lottery scams.

He said the scammers usually worked in pairs – a foreigner and a local – and convinced the victims to help them claim a lottery prize.

He said that the foreigner usually would claim that he was unable to claim the winning money as he was not Malaysian.

“Once the victim agrees to help, the foreigner and his friend will then persuade the victim to give an initial amount to ensure that the victim will not run away with the winning money,” he said.

In the most recent case, a 70-year-old man who had just left the Tabung Haji building in Jalan Timah Sari here was cheated of RM120,000.

ACP Abdul Wahib said the victim was approached last Thursday by an Indonesian man in his 50s.

“The suspect showed a fake lottery ticket to convince the victim and promised to share 5% to 10% of the winnings with him if he agreed to help him,” said ACP Abdul Wahib in a statement yesterday.

He said they were joined by another suspect, a local man in his 50s, claiming that he was also trying to help the Indonesian claim the prize.

ACP Abdul Wahib added that when the victim agreed to help the suspect, he was told to fork out an initial amount to the suspect before claiming the prize.

“The victim withdrew RM120,000 from a nearby bank and passed the cash to both the suspects, who then fled with the money while the victim was photocopying his identification card,” he said.

He added that the case was being investigated under Section 420 of the Penal Code for cheating.

ACP Abdul Wahib advised the public, especially senior citizens, not to be fooled by the syndicate. 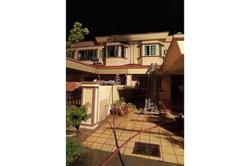 RM44mil set aside for road upgrades in Masai, Batu Pahat and Mersing