Is Malaysia ready for the Michelin Guide?

However, making it on the world culinary map requires strategising – one of which is the world-renowned food bible, the Michelin Guide.

The question is can Malaysia be chosen as the next country for the Michelin Guide since Malaysian restaurants overseas have already carved a name for themselves particularly, the Michelin New York guide and Lonely Planet.

Back in 2011, New York-based Laut became the first Malaysian restaurant to be awarded a star rating in the Michelin New York City restaurant guide (they lost the star in 2013).

Nevertheless, since then, restaurants serving Malaysian cuisine such as Nyonya, New Malaysia and Fatty Crab have been gaining recognition, making it to the 2015 Bib Gourmand Michelin New York guide.

The Michelin Guide’s first foray into South-East Asia was launched in Singapore on July 21, after Japan, Hong Kong, and Macau. The guide awarded 29 Singapore restaurants, with the highest accolade going to Joël Robuchon Restaurant which snagged three stars.

“The biggest challenge for Malaysia to be on the world stage of culinary gastronomy would be whether Malaysia is ready for consistent standards of quality as that would be its biggest hurdle compared to Singapore.

“Malaysian cuisine is definitely worthy to be reviewed by the Michelin Guide but there are still a lot of areas where Malaysia can improve on,” said executive chef of Hilton Kuala Lumpur Warren Brown who worked with two Michelin-starred chefs Daniel Galmiche and John Burton-Race for 10 years during the course of his career.

Brown, 44, said that the consistency of fresh produce such as fish and vegetables from the suppliers and vendors must be improved, because for Michelin, it is all about consistency.

Although the Michelin Guide has been revered as the best food guide in the world, it too has received its fair share of criticisms on its relevance due to the influx of food bloggers and food review websites.

Brown said it would be entirely up to an individual whether to believe the guide.

“I don’t think there is anything wrong or right about it but the Michelin Guide does have a very big reputation as it is one of the first food guides that is recognised in the world for delivering consistent standards,” he said.

Michelin-starred Chef Jeff Ramsey, 40, said Malaysia should be chosen by the guide due to its diverse food scene and being at the centre of Southeast Asia with its rich food culture.

“Malaysia has an array of food ranging from the Malay, Chinese, Indian and Nyonya cuisine,” he said.

Ramsey who set up Babe with his business partner, said that the Michelin Guide will stand the test of time as it is still the top food guide in the world.

He added: “Serious foodies who do not mind travelling for a unique food experience will use the guide to find restaurants in countries they have not been to.”

The Michelin Guide, established in 1900, awards restaurants based on a three-star model: the first star indicates a very good restaurant, a second star awarded would mean that it has “excellent cooking, worth a detour”, and the third star demonstrates that the food served has “exceptional cuisine, worth a special journey”.

Apart from the grading, the Bib Gourmand is also awarded to restaurants that serve good food at moderate prices where in Singapore, it is under $45 (RM132).

On July 14, ahead of the full launch of the Michelin Guide, the Bib Gourmand distinction was awarded to 34 eateries in Singapore.

After the announcement, the Singapore Straits Times reported that the eateries saw a huge spike in business and drew long queues. Eateries such as A Noodle Story, Hoo Kee Rice Dumpling and Hong Kee Beef Noodle all had their food sold out by early afternoon.

It was also reported that New Ubin Seafood’s manager Pang Seng Meng, 61, said their biggest concern would be managing the expectations of new diners who may have a pre-conceived idea of what the food in their restaurant should be since being listed on Bib Gourmand.

Restaurants are assessed by the Michelin inspectors based on five criteria; quality of the products, mastery of flavour and cooking techniques, the personality of the chef in his cuisine, value for money and consistency between visits.

Meanwhile, food blogger Sean Yoong, 40, said that he finds food bloggers and community reviewers do not have the same expertise as professional food critics.

“A person who reviews food for a living typically has the experience, training and a more comprehensive understanding of food to be able to judge critically what is considered good or not good,” he said, adding that he has not had the experience to have travelled and explored a diverse range of restaurants in the world.

“We do not have a mature enough restaurant scene. People here do not have the spending power to dine at fine dining restaurants and justifiably not willing to spend that kind of money compared to Singapore,” he said.

However, he believes that the guide still has an edge against different guides and food reviewers out there.

“The guide is considered the creme de la creme of what food criticism and food evaluation is,” he said, adding that if a restaurant was a certified three Michelin-starred then that restaurant has reached the pinnacle of what world cuisine is.

Local Malaysian foodies meanwhile, claimed to use FoodAdvisor, Yelp and food blogs to get their reviews on restaurants as restaurants on the Michelin guide gives off the impression that it is too pricey for the average Malaysian customer.

Levin Lim, 27, said that he felt the guide was important only to the restaurants as the guide is considered prestigious to restaurateurs which would ultimately create extra publicity for them, but not for the consumers.

Jessica Tan, 30, said that the only time she looked at the Michelin Guide, would be at an airport lounge or if she had a foreign guest to impress.

However, Jeanie Leoncia, 27, acknowledged that the Michelin Guide was still relevant as it will increase the standard of food as most restaurants do not take the initiative to improve on food presentation.

The Michelin Guide may or may not sit well with different facets of society, however, it cannot be denied what the guide can do for restaurants in Malaysia as seen in the surge of business and publicity for restaurants awarded with the Michelin star in Singapore. 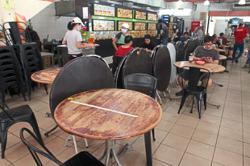