Giving back to the earth, getting veggies in return

Here are two enterprising ways of cutting food waste: A hotel and an organic farm work together to turn kitchen waste into compost while a food foundation gets surplus food for the needy.

WILL Chua is a civil engineer with three masters degrees who was working in a high-powered job as a manager with the Singapore Economic Development Board before deciding to give it all up and return to Johor Baru – to get into organic farming.

Instead of neatly pressed shirts and suits, nowadays you would see him in a sweaty T-shirt on the farm or driving a lorry with large brown dustbins around town, making rounds to pick up food waste!

He makes stops at Renaissance Hotel Johor Baru, a fishmonger, a restaurant, an onion and garlic wholesaler, and a vegetable wholesaler.

“I guess you could say we are a bit like a private waste management company but with no contract. We get these places to separate their food waste. We go collect it then turn it into compost.

“Before this, some were burning their waste, some were throwing it out, which meant it ended up in the landfill, so we are helping them to cut their carbon footprint,” he says.

“Stupid,” he jokes good naturedly, when asked if he is stupid or intelligent for making such a switch in careers.

More than a year ago Chua was at a crossroads, looking to choose either his career as a public servant in Singapore which meant getting a Singapore citizenship then maybe going off overseas or coming home to JB to be with his mum who was living by herself.

“I took a year’s sabbatical, did some meditation and saw that the highly-stressed, high-performance Singapore life wasn’t the life I wanted to lead, away from family and friends.’’

It so happened that four of the close friends he had hung out with in Melbourne while studying there were also coming back to Malaysia around the same time.

And they noticed family members and friends having all sorts of medical problems, which they believed had something to do with the food they were all eating.

So the four of them – another civil engineer, one electrical engineer, a finance graduate turned businessman and a doctor, all in their 30s – got together with Chua to start an organic farm.

Chua’s late father had left him an acre of land in Kempas, Johor. It all fell into place when they met Ah Lek, a 47-year-old organic farmer who was struggling with not enough land and with having to deal with middlemen who forced his prices down.

And so a partnership – and bond – was forged.

“We told Ah Lek we are in it for the long haul and wouldn’t cheat him. He put his trust in us and came on board. And we found a lot of synergy together.”

It started off at first as an effort to “Feed Our Loved Ones”, which is how Folo Farm got its name. Their sifu Ah Lek was the one who told them about the wonders of kitchen waste and what it could do for the soil.

‘“Initially we thought, ‘My goodness, do we have to go to all the mamak stalls and collect the food waste from there?’”

Then Ah Lek told them about 72-year-old Pierre Loisel, a French-Canadian who has become a bit of a hero in Taiwan for turning food waste into compost to grow organic vegetables, which he used to feed and heal his wife who had breast cancer.

The guys went over to Taiwan to meet Loisel who generously shared his knowledge with them. And eight months ago, they gave it a shot, setting up their own composting centre on a plot of land one of them had in Ulu Tiram, Johor.

They collected food waste from friends with restaurants for a start.

“At first, we were using our hands to do the composting manually. We found the temperature in the compost went up by itself naturally to 70°C. It was magical to see nature working like that,” says Chua.

Once they started getting the hang of it, they pumped RM400,000 into their composting centre to put in a platform, get lorries, a tractor, 100 garbage bins and hired help.

Chua admits it was a hassle initially to get hotels and restaurants to give them their food waste until Hotel Renaissance JB agreed.

“We were lucky because both the owner of the hotel, Mr Lee, and the executive chef (Mohamad) Mahady were very enthusiastic. That is a rare combination.”

Chef Mahady says it actually serves the international hotel well to give their food waste to Folo Farm to be turned into compost.

“They use it to fertilise their soil so they are giving back to the Earth. These vegetables are used to feed their families and friends and if they have extra they give it away to orphans and old folks homes so there is also charity involved.

“And we save quite a lot of money because we don’t need to pay anyone to come in and collect our kitchen and food waste. We save on carbon emission as well. So we are basically helping to save the earth as well.

“In Marriot (the international chain that Renaissance JB is a part of) we have something called ‘Spirit to Preserve’. By doing this, we are preserving nature and giving back.”

Under Chef Mahady’s firm hand, food waste separation has now become a norm at the hotel.

There are the brown bins from Folo Farm all over the hotel kitchen and the hotel staff know what food waste – for example: fruit peels, vegetables peels, leftover cooked rice with curries, meat, leftover desserts – goes into which bin.

There are even signboards in the kitchen as reminders.

Chef Mahady has worked in Kazakhstan, Saudi Arabia and the Maldives. Separating waste, reducing food waste and composting is something that comes naturally for him. It also touches him on a very personal level: He has a 16-year-old son who has stage four cancer.

Having no history of cancer in his family, Chef Mahady believes his son’s cancer has to do with the “chemically-tainted food” his son has been eating.

“I blame myself because of the food I was buying and feeding my family,” he says emotionally.

So he totally gets Chua and his friends’ desire to grow their own healthy vegetables to feed their loved ones.

Fertile: Chua and his group are giving back to Mother Nature by composting kicthen waste to feed their organic farm. Waste that would otherwise be burned or dumped in a landfill instead is saved and used as fertiliser to produce healthy vegetables. — Photo: 123rf.com

Each morning, Chua or another driver turns up at the hotel in a lorry to take away the bins of food waste, leaving behind the same number of clean bins for the next day’s collection.

Chua’s good friend and fellow farmer in the venture, Tang Thian Yeong, says their farm is able to supply organic vegetables for 40 “families, friends or fools” every week.

They pay RM2,000 for six months’ supply of the vegetables. Each week, everyone gets a box with their veggies, which works out to slightly over RM300 a month. As with other such farm-to-consumer schemes, they don’t get to choose what’s in their box because it all depends on the harvest.

Tang says they have another 40 people on their waiting list but they just haven’t been able to grow their vegetables fast enough.

Groups of students visit the farm to learn about nutrition and organic farming, and the farm charges a fee for this.

Still, when you work out the math, all this doesn’t come up to very much especially with the RM400,000 investment in the composting centre. At least not yet.

Chua who works full-time on the farm hasn’t drawn a salary for the past one-year-and-a half he has been there and has been living off his savings.

“Currently we are running at a loss. Our first objective is to get ourselves financially sustainable, subsidise the operation then we can grow more veggies.

“We are not expecting a return on our investment in a year or two, but we have a rough idea where the income stream can come from,” says 35-year-old Tang who is a graduate in finance and who also runs his family’s business.

Aiming to do more

One of the income streams they are looking at is the compost.

When they used it on their farm some three months ago, it worked its magic on the vegetables. Currently, they are producing compost from 2 tonnes of food waste daily.

They reckon in about six months or a year, they would have enough solid and liquid compost to sell to others who want to start their own farms and urban gardens.

Now that Renaissance Hotel JB has joined hands with them, Chua doesn’t think it will be a problem getting other hotels and restaurants to also give them their food waste – “but we need to get the (composting) technique right”.

“Then we can see if we can create a network of like minded people to collect the food waste. We are doing this ourselves so we cannot be spending too much time trucking all around to collect food waste,” he says.

Chua says other financially sustainable projects they are looking at for later on would be to help design and construct home gardens for others who have land and want their own organic patch.

He sees the number of people getting more passionate about organic food and a healthy life style is growing in Malaysia and “we hope they don’t have to go through what we have gone through”.

Chua says when they first started they had no idea where to get their good organic fertiliser from, and it was only later on that they got to know that the foundation of organic farming is having good compost.

“We are currently composting two tonnes of food waste a day but if we are able to do it on a bigger scale, it will become cheaper. There are plants in Germany doing 100 to 200 tonnes even 500 tonnes.

“We hope we can help others start and maybe there could be some income or some revenue sharing from it. We don’t know yet.”

Whatever it is, these guys are living healthier and are keen on helping others do the same.

Chua himself has lost a few kilos. His health problems, which were off the charts while he was working in Singapore, are now gone.

And they are all happy they get to do all this by doing their bit for the environment.

He went hungry as a kid, now he feeds the needy 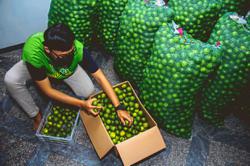