MIRI: Northern Sarawak has seen an increase in the number of hotly-contested seats.

Among them are urban seats in Miri as well as rural constituencies deep in Sarawak's interior, known for their large geographical size and challenging terrain.

They will slug it out in a seat where Ling emerged as giant-killer in 2011 when he defeated then-SUPP president Tan Sri Dr George Chan Hong Nam.

Though Ting is a charismatic and popular politician, SUPP's chances of winning back Piasau may be jeopardised if former SUPP members now with UPP vote against their previous party out of spite.

Lee is a hardworking and dedicated politician who has displayed his qualities as a capable assemblyman in his 20 years in office.

However, he may also be affected by the SUPP-UPP spat.

Dr Baru, a dentist, is new to the election scene.

The atmosphere in Pujut is equally intriguing as the Barisan direct candidate is Datuk Hii King Chiong, a business tycoon with powerful connections. Hii had quit SUPP to join UPP.

He will be challenged by DAP candidate Ting Tiong Choon, Sarawak PAS commissioner Jofri Jaraiee and incumbent Fong Pau Teck, who is contesting as an independent.

Fong, an ex-DAP member, may not be much of a force to be reckoned with, but his entry into the fray may dent his former party's chances to win Pujut.

That leaves Hii with a reasonably good chance of winning the seat, which has 26,202 voters.

Another hot seat to watch will be Marudi, where the SPDP-Teras rivalry may play out.

SPDP candidate Datuk Dr Penguang Manggil was chosen as the Barisan candidate ahead of incumbent Datuk Sylvester Entrie from Teras.

Penguang is being challenged by PKR candidate Elia Bit and independent Louis Jalong.

In the new seat of Mulu, the battle will mainly be an internal fight among the Kelabits due to unhappiness over the choice of candidate.

The Chief Minister Tan Sri Adenan Satem had picked Datuk Gerawat Gala as a Barisan direct candidate instead of giving the seat to SPDP, who had earmarked its senior vice-president Dr Roland Dom Mattu as its candidate.

Dr Mattu has entered the race as an independent.

DAP and PKR are also clashing head-on in Mulu with their candidates Paul Raja and Paul Baya respectively.

This seat is seeing a repeat of the 2011 polls with SPDP candidate Willie Liau taking on incumbent Baru Bian, the Sarawak PKR chairman.

SPDP feels it has a chance to wrest back this seat of 7,375 voters but Baru may be able to defend it successfully on May 7.

In this remote constituency, the Baram Dam controversy and problems faced by the people living in the vicinity are still contentious factors for Barisan incumbent Dennis Ngau, who is defending the seat.

Ngau is a first-term assemblyman from PBB. Even though he is hardworking and always on the ground, he stirred up a controversy among many constituents by his declaration of open support for the construction of the proposed RM4bil Baram Dam that would have affected at least 20,000 people from 25 longhouses.

Although Adenan announced last month that the dam project has been halted indefinitely, some people were not convinced.

Ngau is facing PKR's Roland Engan in a straight fight for this seat of 10,000 voters.

An Orang Ulu-majority area, Belaga is also home to many resettled Bakun Dam folks. Located deep in the hinterlands, the resettled communities are generally happy with their new homes.

However, issues like poor water supply are long-standing matters. Other complaints include accessibility to hospitals (there is a local public clinic) and a sense of continued isolation, with most of the resettled longhouses surrounded by huge plantations.

The seat is itself even larger – roughly the size of Pahang before it was divided to create the new Murum seat.

Out of the 200 settlements in the area, only about half are connected by roads. Belaga, which borders Kalimantan, Indonesia, is commonly referred to as the last frontier.

In this election, PKR is fielding Alex Lihan, a local who is expected to focus on the lack of job opportunities in the constituency defined by its hydropower dams. Alex is facing the incumbent Liwan in a straight fight this time. 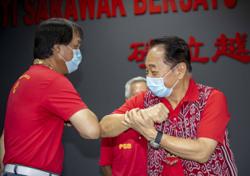