Actress Jasmine Suraya Chin will not make any denial if she is dating someone, Mingguan Malaysia repor­ted.

The Sarawakian said she was not like other artistes “who will deny that they are seeing someone when in fact they are really a couple”.

Jasmine, 25, said she preferred not to be a hypocrite.

She claims that she is not seeing 34-year-old actor Pekin Ibrahim.

“He (Pekin) and I are good friends but we are not lovers,” she added.

> A high percentage of those who are pregnant out of wedlock are teenagers, with some of them children as young as 10, Berita Harian reported.

“A total of 435 cases of baby dumping have been reported from 2011 until June this year,” she added.

Dr Siti also said 12,473 rape cases had been lodged with the police during the corresponding period.

> Kosmo! reported that Nur Fathia Abdul Latif and Aiman Hakim cannot stay away from each other although they are fierce competitors as actors.

Nur Fathia, 28, said Aiman was her biggest rival in the profession but admits despite the fierce rivalry, she is fond of Aiman.

“Many people are not aware that we are rivals despite being in love with each other,” she added.

She said the couple had even discussed about marriage but had yet to make any decision as they were busy working. 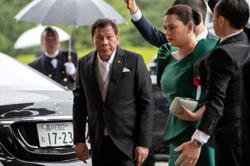