From ‘impossible’ dream to i-City

THE Lunar Year of the Monkey is still far off – three months from now. Yet preparations to create new lively attractions in the i-City theme park have already begun with the arrival of a gigantic sculpture of a black gorilla.

“Many more little monkeys (sculptures) will be added to join our King Kong in the theme park. I believe in laying the ground now to attract more tourists, especially during Chinese New Year,” says Tan Sri Lim Kim Hong in Man­darin, as he gamely poses for a photograph with the sculpture.

“This new feature, once fully lit at night with bright colours, will undoubtedly be a hot tourist spot during the holidays.

“We have to work far ahead,” says the energetic Lim, 64, as he drives this writer around his massive property project i-City, whose gross development value (GDV) totals RM9bil.

When i-City’s first attraction “City of Digital Lights” filled with artificial trees and livened up by neon lights was opened to the public in December 2009, many had doubts over whether a night tourism concept would work in Shah Alam, a place more known for industrial parks.

But after five years, the revenue from the theme park business increased to RM50mil and annual visits rose to 3.4 million in 2014. The revenue will rise further, says Lim. 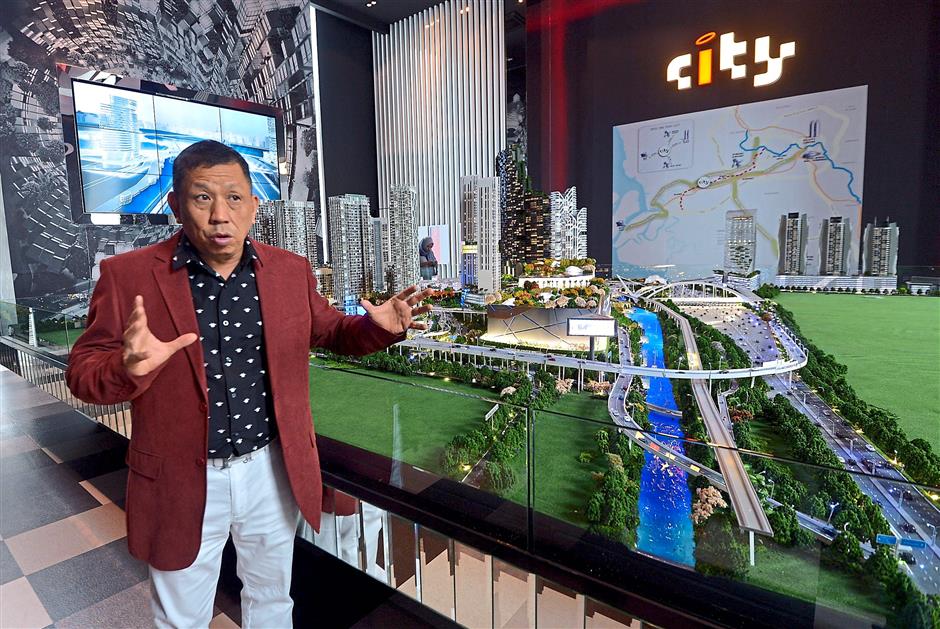 Visionary mind: Lim explaining his vision for the model township of i-City, which is on display at the i-Gallery in Shah Alam.

The self-taught and media savvy businessman, who got his start at the age of 14 as an apprentice carpenter in Muar, has remarkable entrepreneurship and business acumen, which is key to his success in the corporate world.

He has started several firsts and succeeded. But today, he claims he is more noted for being financially healthy, as he is among the few corporate players who do not owe banks any personal debts.

“Previously, I was famous for my entreprenuership. Today, I am more famous for being financially sound,” declares Lim.

Apart from holding a stake of over 70% listed in I-Berhad (with market capitalisation of RM390mil on Nov 3) via Sumurwang Sdn Bhd and Sumur Ventures Sdn Bhd, Lim says he personally holds “a lot of cash and investments in funds, as well as overseas investments”.

The i-City project is owned by I-Bhd.

The group chairman of I-Bhd reveals he has set aside personal cash of RM500mil for the use of I-City.

“If I-City is hit by a downturn in property and cash flow problem, I will use my own money to finance all I-Bhd’s projects,” he says.

About 20% of projects within i-City are completed, while another 50% are under construction and 30% are in the planning stage. The whole enclave, started in 2005, will take another five to seven years to complete. 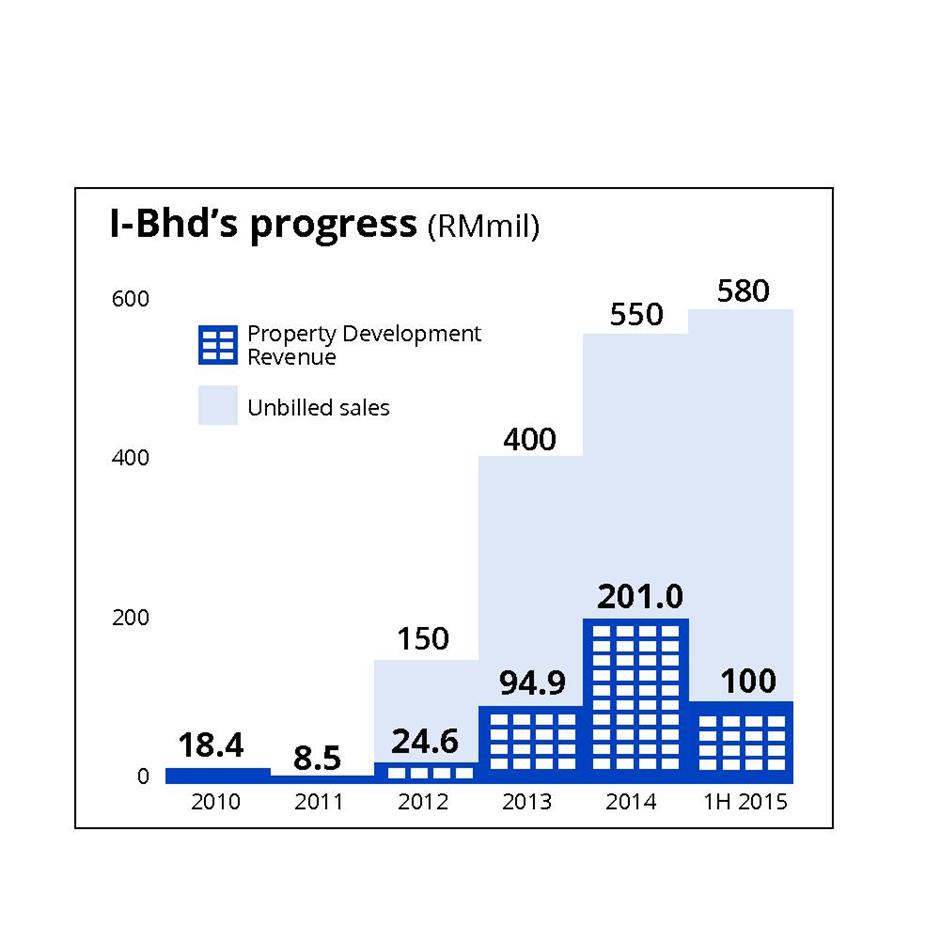 But Lim believes I-Bhd is capable of financing its future developments after raising RM800mil last year via a corporate exercise comprising a rights issue with warrants, bonus issue, issuance of convertible securities and a share split.

I-City, which sits on a 28ha piece of land that was originally Lim’s private holding in Shah Alam, is a mixed residential-commercial-hotel project. It has just handed keys to buyers at one residential block and a hotel has started operation.

“The success of i-City today is the result of a blend of entrepreneurial drive and professional management,” says Lim, referring to a loyal team of professionals headed by his deputy chairman Datuk Eu Hong Chew, who has been with him through thick and thin for 25 years.

Looking back, Lim says that he pushed himself to scale greater heights after succeeding in achieving a targeted level.

“When I was a carpenter, my boss used to tell me: if you could master all the skills in woodwork, you could build a high-rise (building). I thought he was joking about an impossible dream.

“But today, I am the developer of this big project,” says Lim, beaming with pride as he explains the progress of i-City development.

In a two-hour interview with Sunday Star, the astute and frugal businessman talks about how his entrepreneurship has led him to one success after another, i-City development and future of I-Bhd.

You dropped out of school at 14 due to poverty. How was it possible for you to make your first million at 18?

I had to leave school after my father died. I became an apprentice carpenter at 14 and learnt all the skills within two years. After that, I started my own furniture shop, working 12 to 16 hours a day. I taught my workers to specialise in producing parts rather than making the whole furniture. In this way, quality control was better and production was fast. At 18, I was the first in Muar to export furniture to Hong Kong. That was how I made my first million.

After that, I started making spring mattresses and founded Dreamland Malaysia, which was listed on the stock exchange in 1987. In fact, I was the first to introduce spring mattress into the market, which was dominated by foam mattresses those days. Mine was also the first Malaysian firm to enter China in 1984 to set up

In 1991, I diversified into stainless steel pipes and renamed my firm Kanzen Bhd.

What caused you to cash out of Kanzen Bhd in late 1993, as you were sentimental towards your company?

I often observe what other corporate leaders say to get inspiration. In late 1993, there was an offer to buy my 55% stake in Kanzen. I was hesitant as I was sentimental towards the business I had set up.

But then I heard a comment by Tan Sri William Cheng (of Lion Group) that if there was a good offer for his business, he would sell for a good profit. Also, as Kanzen’s yearly profit was around RM3.5mil, it meant it would take me 100 years to net RM350mil if I did not accept the offer. In addition, I thought the market for stainless steel was getting saturated.

Looking back, I was very lucky to have sold my Kanzen stake at RM7 per share. The net tangible

asset per share at that time was RM1.70. After two months, the stock market crashed. (Kanzen shares fell to below RM4 during the crash.)

Have you experienced any failure in your business in the past 50 years? Looking back, was it a mistake to buy Sanyo after the Kanzen sale?

I have been a very conservative businessman. Every new venture is taken with calculated risk and measured steps. I upgrade myself with the backing of my professional team in every new venture. And I studied business management in a Taiwan university during my Dreamland days.

Since I started business, I have never had to worry about cash flow but my projects. During the recessions of 1987 and 1998, I was cash rich while many others suffered. In fact, I was offered to take over the whole of Multi-Purpose Group for RM540mil in 1998. I accepted the offer from T.K. Lim, but the Government did not give the green light.

With cash from the Kanzen sale, I bought a 28ha piece of land in Shah Alam (which was later sold to I-Bhd for a good profit to turn into i-City development) and another in Jalan Kia Peng in Kuala Lumpur (injected into I-Bhd to develop into a five-star condominium in 2016). Both properties were bought at very low prices then. They now cost many, many times more.

The purchase of Sanyo Indust­ries Bhd (in 1999) to venture into electronics and electrical home appliances was not a mistake, although we dropped the business years later. It offered us a chance to learn about another industry.

If it wasn’t for this venture, we would not have started i-City as a cybercentre in 2005 and ventured into ICT-related business here. (Sanyo Industries was renamed I-Bhd in 2005.)

How successful has i-City been after its launch?

When i-City was first mooted in 2005, it was a RM1.5bil GDV development. Today, it has been enhanced to a RM9bil GDV project.

In the i-City development, we adopt a strategic alliances strategy. Thus, the first phase of i-City MSC Cybercentre development is 80% owned by the Al-Rajhi Banking Group. I-Bhd also has a joint venture with ServCorp of Australia, a leading serviced office provider.

For the management of the hotels, i-City is working with Best Western International on the three-star hotel (in operation now) and has recently signed with Hilton International to build the four-star Double Tree i-City Hotel.

As for the planned RM800mil shopping centre, i-City’s joint venture partner is Central Pattana PLC of Thailand. Central says the mall here will be even bigger and better than Thailand’s.

We believe that these business partners will help expand the economic pie and we will be better off with a small portion of this economic pie, rather than 100% of a much smaller pie.

We are looking for strategic allies to expand our theme park for the third hotel and medical hub. When all projects are completed in five to seven years, we will have 50,000 residents and people working here, where a major LRT (light rail transit) station is being built.

But the success of i-City is not only about path-finding and risk-taking. It is also about building a strong base from a sound business plan.

Over the past 10 years, I have overcome many challenges to develop i-City. The project has gone through five mentris besar and three prime ministers. For the Interchange under construction linking i-City with the Federal Highway, it has gone through three Works Ministers.

In terms of land and construction cost, the total investment is near RM2bil. We are now seeing returns.

What is the future of I-Bhd?

I-Bhd’s financial performance will be consistent. Our growth will be steady. You will not see our share jumping sky high and plunging floor low. (I-Bhd share price on Tuesday close was RM0.54. Net asset per share was RM0.81 at the end of June 2015, according to its Bursa Malaysia announcement.)

Our coming third quarter results will be better compared to similar quarter in 2014. For the current full financial year, results will also improve. As of now, the unbilled sales total RM800mil.

Hence, people should feel safe to invest in I-Bhd. The future financial years will be even better as more projects get completed.

Investors should look at my track record and how I have handled our projects and investments. It’s all done step by step in a systematic way. Cash flow is within our control, even during recessions. Our property projects in i-City are moving and some have been completed. It’s not just empty talk.

I-Bhd has set the target of generating steady revenue of RM500mil per year from property development by 2018. By then, it would also have RM1bil of investment property portfolio (from the share of investments in the shopping mall, its car parks, data centres and two hotels), and double its leisure park business.

Our property development sector has been achieving double-digit growth. Notwithstanding the property sector headwinds, we expect to continue with this growth direction.

Who will succeed you in I-Bhd?

My two sons do not want to work in my company. They prefer to set up their own businesses. Now there are more than 200 staff in I-Bhd, with 10% who have worked for me for more than 25 years.

When will you retire?

No tycoon talks about retirement. Look at Robert Kuok, Lee Kar Shing (of Hong Kong), Tan Sri Loh Boon Siew, Lim Goh Tong and Bill Gates. Loh Boon Siew and Lim Goh Tong worked until (the day) they passed on. At the moment, I am enjoying my work.

I have reached a stage in life where I want to leave a legacy and I thought that if I could turn i-City in Shah Alam into what KLCC is to Kuala Lumpur, it would be a lasting legacy.