By NEVILLE SPYKERMAN and PATRICK LEE

PETALING JAYA: Flight MH17 was confirmed shot down in eastern Ukraine by a Russian-made anti-aircraft missile on July 17, 2014, in a final report by the Dutch Safety Board, but the 15-month investigation did not say who fired it.

Board chairman Tjibbe Joustra said the warhead was that used on a BUK missile system, which exploded less than 1m outside the cockpit, killing three crew members and breaking off the forward section of the plane.

In a press conference at the Gilze-Rijen military base in the Netherlands, Joustra said BUK missile fragments and traces of paint were found in the bodies of those in the cockpit.

He said investigators had exa­mined other possibilities and ruled out a bomb on the plane, air-to-air missile, meteor strikes or aircraft malfunction.

The aircraft crashed over a large area controlled by pro-Russian se­paratists fighting Ukraine government forces with debris scattered over a 50km sq area. 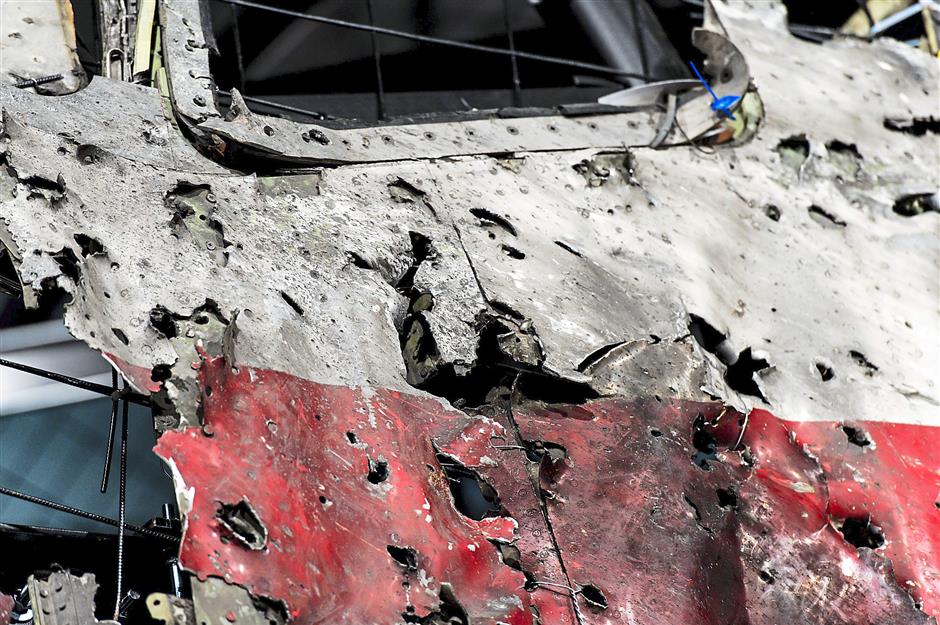 Grim reminder: A section of the rebuilt fuselage of Flight MH17 on display during a press conference to present the report findings of the Dutch Safety Board in Gilze Rijen. — EPA

Joustra also said that the Ukraine government had enough reason to close the airspace over the conflict area but “nobody gave a thought to a possible threat to civil aviation”.

Height restrictions for civil aviation, he added, were imposed but flights continued over eastern Ukraine, including 160 flights on the day of the crash.

Between July 14 and 17, 61 operators from 31 countries flew over that part of Ukraine.

A partial reconstruction of the forward section of the Boeing 777 from parts recovered from the crash site was also unveiled to the victims’ families and journalists.

A video animation of the shooting and how fragments of the missile impacted was also released.

Russia had challenged the finding that a BUK missile shot down the plane, arguing that such a conclusion could not be made with certainty.

A response to these objections, said Joustra, were in an appendix to the report.

The full report also addresses the state of the passengers and whether they were conscious at the time of the missile hit.

“The impact was entirely unexpected, which means that people were barely able to comprehend the situation in which they found themselves.

“There was hardly any time for a conscious response. The occupants were exposed to extreme factors almost immediately,” it stated.

According to the report, the factors were not the same for all the passengers, depending on their location in the cabin.

“A number of occupants imme­diately sustained severe injuries as result of the factors, probably cau­sing death. For others, the exposure caused reduced awareness or unconsciousness within moments.

“It could not be ascertained at which exact moment occupants died but it is certain that the impact on the ground was not survivable.”

‘I want to know who killed the passengers’