A leader for all Malaysians

To his detractors, Datuk Seri Dr Ahmad Zahid Hamidi is an ultra Malay whose rise to become the Deputy Prime Minister is through a full-time political career. Zahid talks about his previous life in the corporate sector and his ties with the Chinese community.

IT’S 4.30pm on a Wednesday afternoon and Datuk Seri Dr Ahmad Zahid Hamidi is midway through meetings after finishing a hectic Cabinet meet earlier. There is still a long line of waiting officials and other guests outside his door.

He finally has his lunch at 5pm – tea time for the rest of us.

“I only get to sleep at 2am now even though I usually finish my work at 8pm,” he says in an exclusive interview with The Star.

Known for his “brother man hugs” with those he is familiar with, he feels he is a greatly mis­understood man. Some of the perception, he feels, is created in the social media by his critics.

“It must come as a surprise to many that I had a Chinese foster father when I was young. I used to help him sell ice cream at a canteen with his children for six years. Although he has passed away (16 years ago), his children are still in touch with me today.

“Everyone in Bagan Datoh (his parliamentary constituency) knows of this special relationship.”

He recalls the many memorable moments he shared with this Hainanese foster father and his family when they ate in the kitchen.

“I would not have revealed this to the Chinese media recently if they had not asked me about it. I am colour blind as I have many friendships with many Chinese and Indians as well,” he said.

When he graduated from Univer­siti Malaya, his first job was with the Chinese-owned OCBC bank.

“During the interview, I was asked why I took up Chinese as an elective course. I took four papers – literature, Chinese characters, history and culture. I took these subjects entirely on my own. No one forced me to do it. I wanted to learn more about the Chinese culture and I am glad I did,” he adds.

And the rest is history – Dr Ahmad Zahid was given the job and he was one of the few Malays in OCBC Bank.

“The bosses trusted me. They didn’t see me as a Malay but someone who could do the job.

“It was largely due to my Mandarin and Chinese studies background,” he says, adding that he considers himself lucky compared with six other trainee officers at the time.

He sportingly uses some Manda­rin phrases during this interview, saying he is also quite comfortable with the Hokkien dialect.

From such humble beginnings, the corporate “newbie” quickly made his mark. He moved to Bank Simpanan Nasional, taking up the post of assistant manager before moving to Permodalan Nasional Berhad (PNB).

“It was a golden opportunity to get such a corporate exposure. It was a good learning curve,” he says.

In the business world, he deve­loped a talent to “save” fledgling companies and later helmed Kretam Holding Berhad and Ramatex Berhad.

“I injected new projects, turned around the companies before transforming them into blue chips,” he says.

Dr Ahmad Zahid, who is also Home Minister, hits out at certain quarters set to paint him in bad light.

He refers to the latest attempt, where his “I will never eat pork to get votes from Chinese” remark was spun by certain portals.

“These portals left out all the other parts about my relations with the Chinese and my university studies. They just distorted that one sentence. I do not think that is ethical journalistically,” he points out.

Dr Ahmad Zahid says those who read his entire speech would have realised that he was speaking highly of the community.

In his speech before opening the Tamping Umno division meeting recently, Dr Ahmad Zahid said it was important to respect each other, irrespective of race or background.

“I believe in cross-culture. Though we are Malays, we must respect the Indian and Chinese cultures. I only don’t eat pork to get votes from the Chinese – that I will never do,” he had said, noting that this was meant to emphasise that one should not go to extremes in politics merely to be a populist.

He says the same applies to winning votes from other communities, saying no one should make empty promises but be rational and moderate.

“That was the spirit and basis of the speech and sentence. Unfor­tunately, the portals decided to spin it to suit their agenda,” he adds.

The Bagan Datoh MP says that although he has always defended the Malay community, he has not deprived fair opportunities to ­others.

“Since Umno’s formation, we have never deprived others. Why? Because Umno is led by credible and rational leaders,” he says.

Dr Ahmad Zahid believes that some element of framing and media agenda has been set by certain individuals aimed at undermining his personality and how it is perceived by the masses.

“I am a Malay but I have never experienced the social divide. I have and always will have good relationships with those of other races. I regard myself as a leader of all Malaysians regardless of their race. I seek the support of all races because we are Malaysians.”

He says that ahead of National Day, it is important that the nation come together as one and one people.

Zahid: Politicking will not do the nation any good 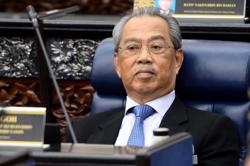