KUNDASANG: Five more body bags are waiting to be airlifted from the Paka Shelter at Mount Kinabalu’s 3,052m mark, with helicopters on standby to pick up the badly-mutilated remains.

The remains are believed to be those of the  last six missing people, and are badly mutilated and in pieces after being crushed by huge boulders and falling rocks around the Via Ferrata trail of the mountain.

Sources  have said they have five bags, adding that they do not know how many victims the bags contain until a post-mortem is conducted as some of the bodies were recovered in parts.

“We have to look at the weather conditions at the mountain before the green light can be given for helicopters to go in,” said rescue officials on the ground.

They added that it was not easy for helicopters to land on Mount Kinabalu as the weather changes constantly with thick clouds and strong winds.

Of the 19 who were killed in Friday’s earthquake, 13 bodies have been recovered since then.

They have said that it is unlikely there are any survivors from the  massive rock fall following the earthquake at the western face of Mount Kinabalu.

Pauzi said the Fire and Rescue Department was fully mobilising its manpower including the use of helicopters. 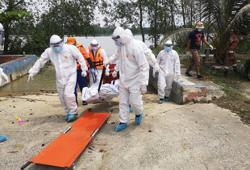