PETALING JAYA: In a harrowing account of her escape from Mount Kinabalu, Australian hiker Vee Jin Dumlao denounced the Government emergency response as a “farce” for quoting fog as the reason for not rescuing climbers stranded on the peak.

“But the sky cleared beautifully and the air was still by 4pm, but they were determined to leave us up there overnight in cold hunger and potential flash-flooding if it rained,” said the clinical psychologist from Sydney on her Facebook page.

According to Dumlao, helicopters dropped off two boxes of supplies “over the cliffs onto inaccessible landslide rubble” instead of taking a clear shot at a huge expanse of land.

While she expressed gratitude for mountain guide Jomius, who saw her party safely down Mount Kinabalu, Dumlao slammed rescue officers who huddled in groups “sharing smokes and food that were meant for survivors.

Rescue officers were reportedly seen only at the tail end of the descent at the safe base of the mountain, with help at the critical areas only arriving nine hours later, as casualties and the injured remained unchecked on the slopes.

“Their token gestures of help by shining a torch for us or offering us bottles of water were redundant and irrelevant. Those who made it to the bottom did not need the help,” she added.

Dumlao also pointed out that a convenient helipad remain unused when it could have been used to transport rescuers to the foot of the peaks.

She heaped praise on the mountain guide “heroes”, who risked life and limb with continuing tremors and rockfalls to refill climbers’ bottles with water from the nearest hut despite suffering losses of their own.

“They formed abseiling lines with ropes and used their own bodies as safety barriers when they had to find alternative paths because the original route were decimated by rock fall.

“I witnessed guides, not emergency workers securing the injured onto stretchers which they would carry down the mountain,” said Dumlao.

She also expressed great regard for the people around Mount Kinabalu, but “little respect” for the Malaysian government, whom she deemed ultimately responsible for the management of emergency services.

So far, 19 people have died in the tragedy, while eight others have yet to be traced.

A magnitude 5.9 earthquake - the strongest in Malaysian history - struck Ranau at 7.17am on Friday, sending tremors through areas such as Tambunan, Tuaran, Kota Kinabalu and Kota Belud. 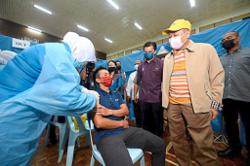