SHAH ALAM: Selangor PAS has denied suggestions that the party had agreed to reduce its representation in the state executive council from four to three.

Its secretary Mohd Khairuddin Othman said claims that there was a consensus among Pakatan leaders on the matter were not true.

“We were informed by the central leadership that they too never agreed to it,” he said in a statement yesterday.

Selangor Mentri Besar Azmin Ali said the decision to reduce PAS’ seats in the state exco was agreed upon by all Pakatan Rakyat leaders and that there was a consensus on the matter.

PAS secretary-general Datuk Mustafa Ali, on the other hand, said the party accepted the decision, considering it a “sacrifice” that needed to be made to resolve the crisis in the state.

“We’re confident that he (Azmin) tried his best to balance the situation in the state.

“To us, this is another sacrifice that PAS needs to make so that Pakatan in the state can move forward,” he said in a statement to the party’s organ Harakahdaily yesterday.

Newly appointed state exco member from PAS Dr Ahmad Yunus Hairi (Sijangkang) also said there must be some hidden blessing (hikmah) to the decision to reduce the party’s seats in the exco line-up.

“What is important is for us to move forward so that the people will benefit from the new administration,” he said. 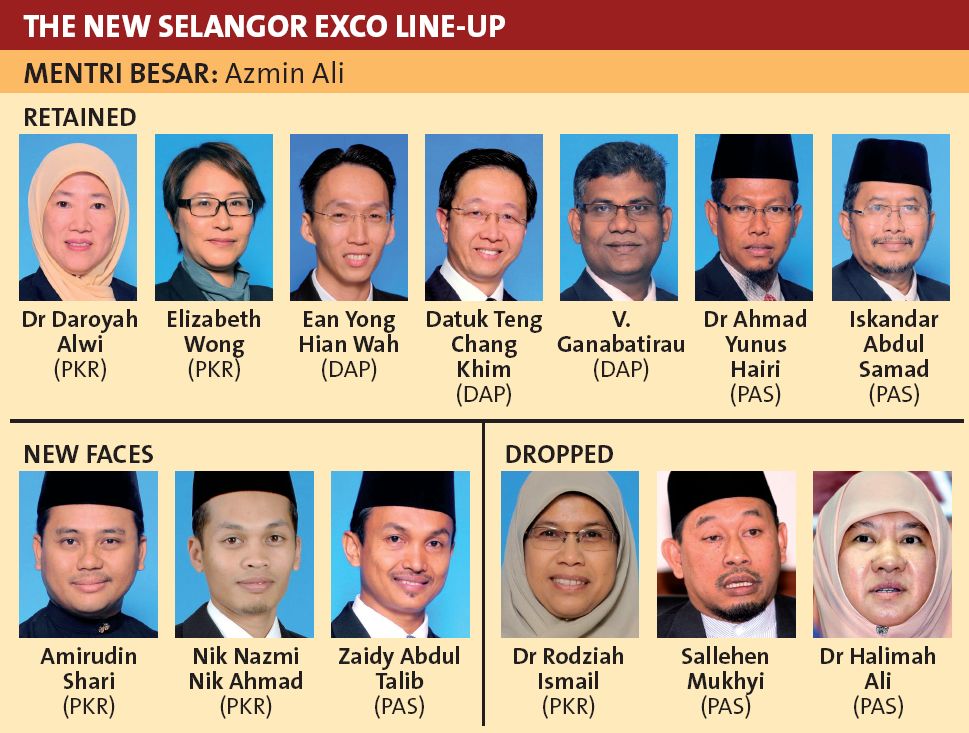 Asked about the portfolio that the party would be given, Dr Ahmad Yunus said there was a need for all parties in Pakatan to discuss the matter as soon as possible.

There was talk that Azmin himself would take over the religious affairs portfolio instead of giving it to PAS because of pressure from DAP.

PAS’ Sallehen Mukhyi, the former exco member in charge of religious affairs, was one of the members from the previous line-up who has been dropped.

The new line-up was sworn in before Sultan Sharafuddin Idris Shah at Istana Alam Shah in Klang yesterday.

The additional exco seat was instead allocated to PKR, which only has 13 state seats compared to 15 each held by PAS and DAP.

The party now has four executive councillors besides the mentri besar post.

PAS has been given the deputy Speaker’s position, previously held by Nik Nazmi Nik Ahmad (Seri Setia), who has been appointed an exco member.

“I have agreed that the position of deputy Speaker be given to PAS,’’ said Azmin.

Besides Wong and Nik Nazmi, the other PKR exco members are Dr Daroyah Alwi (Sementa) and Amirudin Shari (Batu Caves).