PETALING JAYA: A Malaysian passenger plane that came down in eastern Ukraine on Thursday was shot down by a Buk ground-to-air missile said a Ukrainian interior ministry official.

The Buk missile system is a family of self-propelled, medium-range surface-to-air missile systems developed by the former Soviet Union and Russian Federation.

Since it was introduced, the missile system has been continuously upgraded and refined for military purposes.

The official, Anton Gerashchenko told Interfax said all the 280 passengers and 15 crew had been killed.

Malaysia Airlines has tweeted that "MAS has lost contact with MH17 from Amsterdam. The last known position was over Ukraine airspace."

The MAS Boeing 777 plane Flight MH17 was reported to have crashed in Ukraine near the Russian border.

The plane was flying from Amsterdam to Kuala Lumpur with 280 passengers and 15 crew, reports said.

Reports said that it crashed in a conflicted area near Donetsk and it would be complicated to get to the crash.

MAS sources said the plane did not enter the Russian airspace.

Sources said the plane was "shot down" while it was cruising at an altitude of 30,000ft. 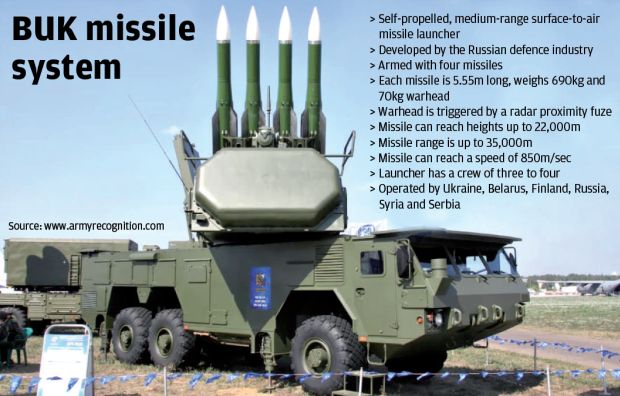