PETALING JAYA: Netizens are not convinced with Datuk Bung Mokhtar Radin's apology over his tweet linking the German football team to Nazi leader Adolf Hitler, saying the gesture was insincere and incomplete.

"When Germany whacked Brazil, I unintentionally said something that hurt d feeling of d ppl in Germany. MY SINCEREST APPOLOGY. LONG LIVE BUNG..", the Kinabatangan MP said in a tweet Thursday morning.

The "Long Live Bung" phrase at the end of the tweet drew the ire of several netizens, with @radianceleong exclaiming it did not amount to an apology.

Another tweeter, @terence7, said it was sarcasm in the place of an apology, while @MeiLengChin questioned the need to include the last phrase, which she said, "Doesn't appear to be sincere".

Prime Minister Datuk Seri Najib Tun Razak had responded to the controversy by tweeting, "The comments made by Datuk Bung Moktar are unacceptable and wrong, and he will withdraw them," a few minutes after Bung issued the apology.

User @twitmsian questioned the timing and sincerity of the Felcra chairman's attempt at making amends, "@MyKinabatangan was dead against apologising for the Hitler remark. Today he apologises after being rebuked by @NajibRazak. Is it sincere?"

The sentiment was echoed by MyWatch chairman R. Sri Sanjeevan, "An apology after @NajibRazak commented about it - typical politician!"

Tweeter @mikeyvoon wanted Bung to show remorse by resigning, and @ameerulaiman voiced his disappointment with the elected representative, saying "Not a shred of respect left for you now. I suggest you give up the position in Parliament. Best if you do nothing at all."

"I think it's weak that BN is condemning @MyKinabatangan for his #Nazi blunder. The appropriate thing to do would be to fire him altogether," said @feistgeist, calling for more punitive action.

DAP's Serdang MP Ong Kian Ming, who tweets from @imokman, joined the call for Bung to step down, "What sort of an apology is that? @MyKinabatangan Pls resign…".

Bung responded to further rebukes by tweeting a picture captioned "Ssshhhhh … Diam2 jangan bising" (Ssshhhhh … be quiet, don't make noise), and also told at least three others to "shut up". 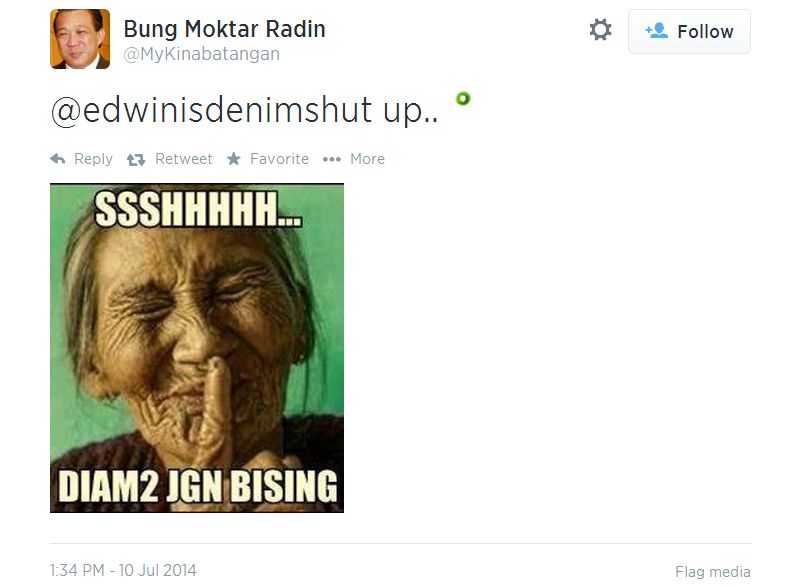 @syaqib found Bung's behaviour unacceptable, as he was "apologising by downgrading and telling people to shut up", while @JuanPabloTiga questioned why Bung demanded silence from his detractors, saying, "A true leader listens to the people and lays down his fat ego to be humble."