Laid to rest: Tan (second from left) weeping as she bids a final goodbye to her daughter at the Batu Gantung Crematorium. With her are Beng Chong (left), Yazman and Teoh's children.

GEORGE TOWN: The agony faced by the family of Teoh Cheng Cheng, whose body was seized by the Penang Islamic Affairs Department (Jaipp) during her funeral on Monday, has finally ended.

Teoh’s body was cremated shortly after she was declared a non-Muslim by the Syariah High Court here yesterday.

Her mother Tan Mah Suan, 64, wept uncontrollably when her casket was brought to the Batu Gantung Crematorium for final Taoist funeral rites.

She wiped away her tears after the casket entered the furnace at about 5.30pm and told reporters that she “felt released”.

Teoh’s four children, aged between 10 and 16, clad in white t-shirts and black pants, knelt before her casket when a priest conducted the funeral rites.

Yazman Ayob, a close family friend who is believed to be Teoh’s Muslim boyfriend, and other family members were also present.

Yazman, 37, who was wearing a face mask and sunglasses, kept avoiding reporters whenever he was approached.

He only said that he felt “sorry for them” and that “it was unfair” before leaving the crematorium.

Teoh, 38, was found hanged at her apartment in Macallum Street here on Saturday. Her funeral at the apartment block compound on Monday was aborted when Jaipp officers came and took away her body, claiming that she had converted to Islam in 1997.

Yesterday afternoon, the Syariah High Court ruled that Teoh was not a Muslim at the time of her death.

Justice Zaim Md Yudin said Jaipp had failed to prove its claim that Teoh was a Muslim, adding that there were discrepancies in her conversion documents such as the date recorded in Jaipp’s registration log book, where details of converts were recorded, which differed from the dates in her conversion application forms. 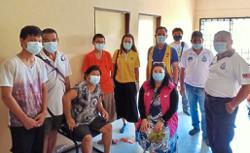