Building on fire in Damansara Perdana PETALING JAYA: A fire broke out at a building in Damansara Perdana, causing clouds of smoke to fill the air.

Traffic slowed to a standstill as motorists tried to catch a glimpse of the huge fire, which occurred at about 11.30am on Thursday.

Initial reports revealed that the building was still under construction.

A Fire and Rescue Department spokesman said that the fire was caused by a spark from a welding operation on the 12th floor.

"Suddenly, there was a big spark and the place caught fire.

"But by the time we arrived, everything had been put out. It was a small fire.

"The large amount of smoke may have given the impression that it was a big fire but it was not," he said. 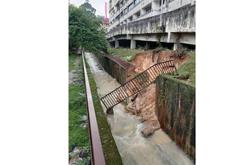