SEREMBAN: Police will not investigate a man for allegedly taking his six-year-old-son from his ex-wife’s house despite a High Court order granting her custody of their two children.

That is because Izwan Abdullah, 31, who converted to Islam, had obtained a custody order from the Syariah High Court last year.

Jelebu OCPD Supt Setapa Yusof said police had to obey the orders of both courts.

The Syariah Court had earlier awarded Izwan, previously known as N. Viran, the custody of his six-year-old son as well as nine-year-old daughter.

“As far as we are concerned, we cannot investigate Izwan for abducting his son. We have to respect and obey the orders issued by both courts,” he told The Star yesterday.

On Monday, the High Court here awarded custody of both children to S. Deepa, 31, after deciding that the law that had jurisdiction over matters pertaining to a civil marriage was the Law Reform (Marriage and Divorce) Act. 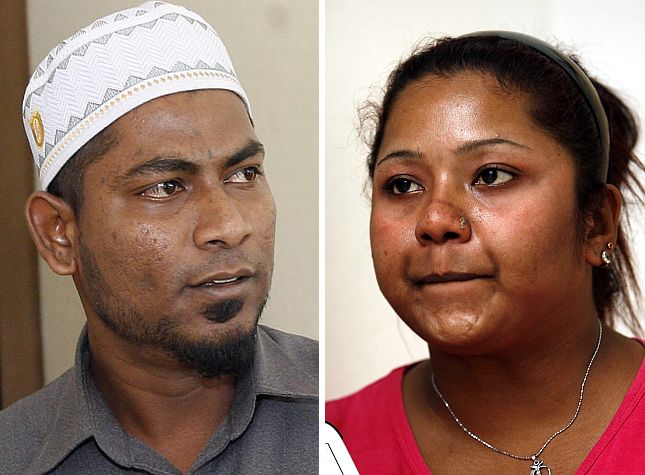 Tussle for kids: Izwan is alleged to have taken his son from his ex-wife Deepa’s (right) house after a High Court order granted her custody.

The court also granted an application by Deepa to annul their marriage because Izwan, who is now working with Yayasan Kasih Sayang, had embraced Islam.

Deepa was shocked to learn that the police would not investigate the abduction. She claimed she had fallen sick worrying about her son.

“I have no knowledge of his whereabouts and I am deeply concerned for my son,” she said, adding that her parents had moved in with her since the incident.

She said she was disappointed with the police stand, describing it as an “injustice”.

“As far as I’m concerned, my marriage was registered through a civil process. It has nothing to do with the Syariah Court or Islamic laws.

“I did not know about the order obtained by my ex-husband nor was I called to present my case in Syariah Court. I don’t even know if I can go to the Syariah Court,” she said, adding that in the civil court, Izwan still had the avenue of appealing against the High Court’s decision.

“I don’t even know if I have this option in the Syariah Court,” she said.

Deepa, who married Izwan in 2004, had during an interview with The Star in June last year claimed that her husband had abandoned the family in February the previous year.

She claimed that in April last year, he took both their children to the Pusat Dakwah Islam here without her knowledge and converted them.

It is alleged he then forcefully took the boy from a hair salon she owned and assaulted Deepa when she tried to stop him.

Subsequently, Deepa obtained an interim protection order against her husband from a magistrate’s court, the case of which is still pending.

Last Aug 26, Izwan obtained temporary custody of the children from the Syariah Court.

Izwan handed the children over when the High Court granted custody to Deepa but the next day, she claimed he showed up at her house and grabbed the boy.

Supt Setapa said police were looking for Izwan as he had breached the interim protection order when he went to Deepa’s house on Wed­nesday.