GEORGE TOWN: A 26-year-old student, said to be the nephew of a deputy minister, became the first person to jump off the newly-opened second Penang bridge.

He was said to have leapt off the Batu Kawan-bound bridge at 2.40pm.

He was rescued by fishermen some 500m from KM13.9 of the Sultan Abdul Halim Mu'adzam Shah bridge, the point where it is believed he leapt off.

Marine police arrived moments later and brought him to its base in Batu Uban.

He is now undergoing treatment at the Penang Hospital's intensive care unit.

Balik Pulau OCPD Supt Lai Fah Hin said the suspect was now in stable condition and an investigation paper had been opened under Section 309 of the Penal Code for attempted suicide. 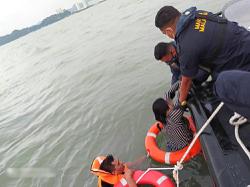