Battle with fires in Jalan Kebun and Johan Setia 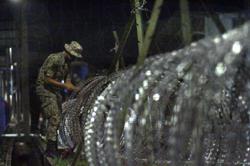 KLANG: Firemen are again fighting peat fires in Jalan Kebun and Johan Setia and their biggest problem is water shortage.

It has become an annual battle that flares up when farmers slash and burn the bushes to plant crops.

These areas, including a 10ha plot collectively owned by about 2,000 owners, are considered remote and lack water resources. At night, it is pitch dark at these places.

“This makes it difficult for us when we carry out our 24-hour enforcement rounds to detect fresh fires or catch those starting these fires,” said Klang Municipal Council enforcement director Andry Arman Masron.

The council, through its enforcement division’s quick action squad Pantas, is fighting the flames alongside the Fire and Rescue department.

Andalas fire station chief Zulkepeli Othman said although there were canals, drains and streams in these areas, the water was insufficient during the hot spell to fully put out fires.

His team of firefighters have been in Johan Setia and Jalan Kebun over the past two weeks.

Zulkepeli added that some of the canals and drains were filled with sludge.

Selangor executive councillor Elizabeth Wong warned that all those involved in open burning would be charged in court.

In IPOH, the forest fire at Gunung Tempurung, near Sungai Siput Selatan, continues to be under control and has not spread to other areas.

Perak Fire and Rescue Department director Yahaya Madis said the fire on the higher level of the limestone mountain was still burning and he hoped it would die out on its own.

“We are expecting rain to fall within the next few days and hope it will douse the flames,” he said.

The fire began over the weekend and has burned a huge area at the mountain.

In JITRA, firemen are battling to put out a fire at Paya Kemunting landfill, the third landfill blaze in Kedah.

He said firemen were working around the clock to douse the flames at the Jabi and Semeling landfills, which caught fire last Wednesday.

In KUALA LUMPUR, a bush fire razed a 1.2ha site along the Silikon Highway, near the Universiti Pertanian Malaysia toll plaza heading towards Universiti Tenaga Nasional (Uniten), at about 8.30pm yesterday. 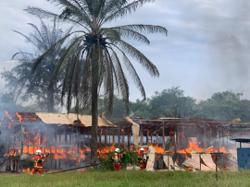