As Prime Minister, he was truly committed towards building a nation where every single one of its citizens could find a place under the Malaysian sun.

THIRTY-EIGHT years ago today, on Jan 14, 1976, Tun Abdul Razak Hussein passed away in London from complications wreaked by leukaemia.

Malaysia lost its prime minister. I lost my father. Malaysia was 19. I was nine.

The days immediately after were shrouded in personal sorrow and national mourning.

My four brothers and I sought to comfort our mother, while the public and heartfelt outpouring of grief throughout the country served as a resounding reminder that we were not alone in our time of tragedy.

I must confess that given my age, and my father’s hectic schedule, I sometimes lament the fact that he gave so much to the country, leaving too little for his family.

However, I have never wavered from being enormously proud of his selfless dedication to our young nation.

I did not get the time to know him. But imprinted in me are the values he imparted, the integrity that he insisted upon above all. Yes, above all; including his family.

I recall the time when my brothers and I approached him one evening and asked that a swimming pool be built at Seri Taman, the Prime Minister’s residence where we lived.

The lawyer that he was, he insisted that we make our case with logical and rational arguments.

We did so, and thought we had presented the argument pretty well, until we noticed his face had started to darken, and the eyes flashed with annoyance.

My father made it abundantly clear that while Seri Taman may be our home, the house belonged to the Government and, hence, to the people.

Anything spent on it would have to come from public funds; and there was no way he was going to allow the state coffers to be depleted on something as frivolous as a swimming pool. “What will the people think?” he thundered. 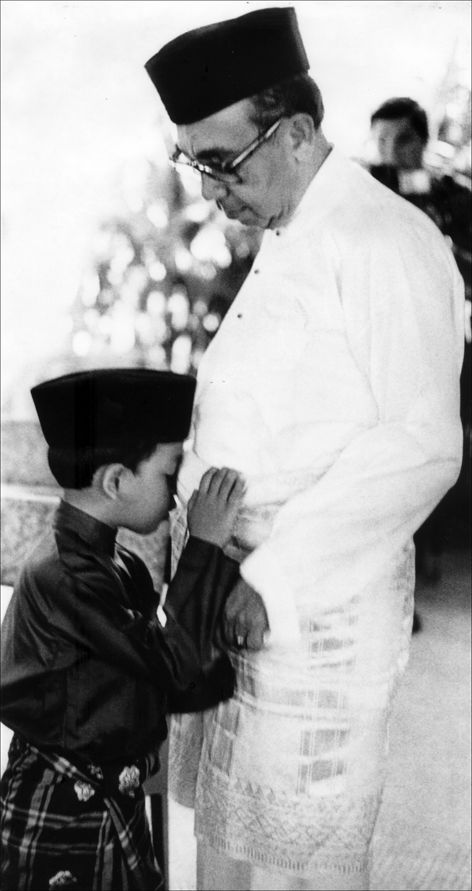 In my years of growing up, I actively sought to hear from people who knew my father well, including those who had worked with him in government, politics, the Merdeka movement and so on as well as his personal friends.

It was my only way of getting to know him. What stood out for me was that in almost every conversation I had about him, the qualities they always referenced were his values.

As the custodian of the nation’s coffers, his frugality was legendary.

“You had to account for every cent, or he would be on your back,” one former minister told me. Well, I knew that already. Not just from the swimming pool episode, but many anecdotes.

My elder brothers often talk about one of the rare opportunities they had to accompany him on an official trip to Switzerland.

He made sure he paid their expenses himself, was so careful with the cost of the trip to the Government that he moved his whole entourage to a cheaper hotel than originally booked, and they dined over and over again at the cheapest restaurant in the vicinity of the hotel.

And then there was his final trip to Europe in October 1975 for medical treatment.

He must have known that it could well be his last trip, yet he did not allow my mother to accompany him to save his own money; probably concerned about her financial situation after his passing.

She only managed to join him weeks later on the insistence of the Cabinet and with a specially approved government budget for her travel.

His integrity was another trait that came up often in conversations. He was guided by what now seems a somewhat quaint and old-fashioned concept of public service – that a public servant is first and foremost a servant of the people whose trust must never be betrayed.

The other point that kept being repeated was his stamina.

Many were later astonished to learn he had been suffering from leukaemia, given that when in office he was constantly on the move, attending to official duties, immersing himself in the minutiae of policy, and, of course, his famous surprise visits to constituencies around the country that allowed him to hear directly from the people about what was happening on the ground.

Of course few people forget to recount Tun Razak’s dedication to rural development. He was “People First”, long before the sound bite.

But above all, what they unanimously emphasised was Tun Razak’s commitment to national unity – towards building a nation where every single one of its citizens could find a place under the Malaysian sun.

That vision was encapsulated in the two initiatives that my father spearheaded in the wake of the May 13 tragedy – the formulation of the Rukunegara in 1970 and the New Economic Policy (NEP) in 1971.

The Rukunegara reconciled indigenous cultural traditions and heritage with the demands of a modern, secular state.

The NEP’s goal, as outlined in the policy announcement, was the promotion of national unity to be undertaken via a massive experiment in socio-economic engineering through the twin thrusts of eradication of poverty irrespective of race and economic restructuring to eliminate identification of economic function with ethnicity.

The debate on the NEP rages on today. I myself have publicly remarked that something has gone awry in its implementation.

The fixation on the quotas and the seemingly easy route to unimaginable wealth for a select few has created an intra-ethnic divide in class and status, while fuelling inter-ethnic tensions.

Both these developments serve to undermine, if not completely negate, the over-arching goal of Tun Razak’s NEP – strengthening national unity.

What went wrong? Some have argued that the fault was affirmative action itself.

For me, it was because its implementation was skewed by the focus on the tactical approach rather than the commitment to the strategic goal.

However, in terms of the larger vision, the best that can be said about the NEP is that it initially helped blunt the edges of racial conflict in the aftermath of May 13.

Thanks in part to the NEP, Malaysia did not follow Sri Lanka, which became embroiled in decades of strife between the immigrant Tamils and the indigenous Sinhalese.

That is no small achievement. But the NEP promise of strengthening national unity has not been realised.

In fact, there are signs that inter-ethnic and intra-ethnic tensions are once again approaching worrying levels.

What can be done? There is a Malay proverb: Sesat di hujung jalan, balik ke pangkal jalan. Loosely translated, it means “When one has lost one’s way, one should return to the beginning”.

And “the beginning” here, in my view, is the values, commitment, vision and inclusiveness demonstrated and embodied by Tun Razak.

I have mentioned earlier the remarks about his integrity, commitment to the concept of public service and his vision of a progressive, prosperous and united Malaysia. But let me close here by emphasising two other highlights of his legacy.

One, he was a true democrat. Two years after running the country as head of the National Operations Council, he disbanded the committee and restored democratic rule. He held virtually dictatorial power as the NOC chief, but his world view and values rested on a foundation of democratic rule, not dictatorship.

His decision-making style exemplified this as well: He brought in all who needed to be involved and engaged in a consultative discussion before any major decision was adopted.

He never excluded those with contrarian views; he encouraged multiplicity of opinions in order to have the best chance of making a right final decision.

Two, while he was committed to helping improve the material quality of life for the majority bumiputras to avert another May 13, he viewed this as a national prerogative rather than a racial one.

That, to me, explains his determination to involve Malaysia’s best and brightest in this quest, regardless of their racial or ethnic origin. Just check out those who served him and his administration back then.

They were, and are, Malaysians, all united in their determination to rebuild this nation from the ashes of May 13.

That was Tun Razak’s legacy to Malaysia. We can best honour it by returning to Pangkal Jalan.

> Nazir Razak reflects on the personal life of his father, and the legacy he left to the nation, on the 38th anniversary of the passing away of our second Prime Minister on Jan 14, 1976.