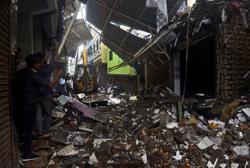 The recipient for the international-level award was Dr Zakir Abdul Karim Naik, a Muslim preacher from Mumbai, India.

Abdul Hamid, 69, who holds a master's degree from the Al-Azhar University in Egypt, had served as Mara chairman, a Member of Parliament and Senator, as well as Malaysian Islamic Development Department (Jakim) Director-General.

"I am overwhelmed to be given this award. It is an honour for me and my family," he said in his speech.

Meanwhile, Dr Zakir Naik, 48, the founder of the Islamic Research Foundation, is a graduate in medicine and surgery from the University of Bombay, Mumbai.

"Thanks to the Malaysian government for this recognition. I am very happy to get this awards and wish to thank all Malaysian for accepting me as an Islamic preacher in the country," he said. - Bernama