IPOH: A Form Five student with a previous psychiatric record was found hanged at his double-storey home at Taman Bandar Baru, Kampar.

Kampar OCPD Supt Ng Kong Soon said the boy's mother had just returned from sending his siblings to school when she made the shocking discovery at 7.30am on Friday.

"The 17-year-old boy from SMK Sentosa had hung himself using his school tie at the house staircase.

"The mother called the Kampar Hospital and medical personnel confirmed the boy's death upon arriving at the scene.

"His body was sent for post-mortem and the cause of death was identified as asphyxia due to hanging," he said, adding that the police were not treating the death as suspicious. 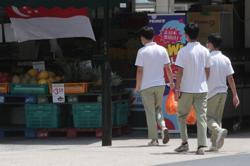