.A Malaysia flag was placed on national hockey player Chua Boon Huat's casket as pallbearers comprising his close friends, coaches and team mates paraded some one kilometre from the family home in Taman Semabok Perdana in Malacca to the main entrance of the residence garden during the sombre send off on Monday.

MALACCA: Scores of family members, friends and teammates gave a grand but sombre sendoff for national hockey player Chua Boon Huat (below, left), who was killed in a car accident.

The wake was held at his family home in Taman Semabok Perdana. About 500 people, including national hockey players and representatives from the National Sports Institute, turned up to pay their last respects. Many of his family members and close friends wore black T-shirts with the number ‘3’, which was his jersey number.

The front of the T-shirts were printed with the words “We Love Chua Boon Huat”.

Boon Huat, 33, was killed last Thursday when his car hit a water tanker on the LDP.

A Malaysian flag was placed on his casket yesterday as close friends, coaches and teammates took turns as pallbearers.

The procession covered about 1km from the home.

National coach Paul Revington said in the eulogy that Boon Huat was a gifted player meant for the big stage, adding that he had often stood up for his team.

“I will miss his long hair and ponytail and all the good things about him.”

“This is really sad. I will miss him as a person who is absolutely beautiful and agile,” he said, adding that he was proud of having coached Boon Huat in his team.

National assistant coach S. Arul Selvaraj said he could only think of all the good things Boon Huat had done and the good times he shared with him.

“I miss someone who was very close to my heart.”

The cortege left the family home in Taman Semabok Perdana at 2pm after the eulogy and final prayer ceremony. Logan Raj breaks down at the funeral.

The cremation took place at the Malacca Memorial Park in Jelutong.

It is learnt that the national player’s hockey stick was placed next to him in the casket before it is sealed.

Boon Huat’s elder brother Aliff Nor Najmi Chua, 42, said the coming Hari Raya celebration would be a sad one as he lost a dear and loving brother.

His ashes would be placed at the Seck Kia Eenh Temple columbarium in Gajah Berang later, he said when met at the memorial park. 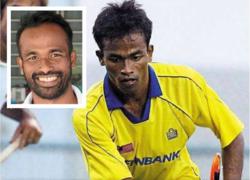