KUALA LUMPUR: More than 300 people were forced to evacuate two buildings when a landslide caused part of the retaining wall of a car park to collapse in Jalan Semantan here.

Heavy rain from 3pm yesterday had caused soil erosion at an adjacent hill, resulting in the landslide which rendered buildings on either side of the collapsed wall – CIMB Commerce Square and Amanah Raya – unsafe. 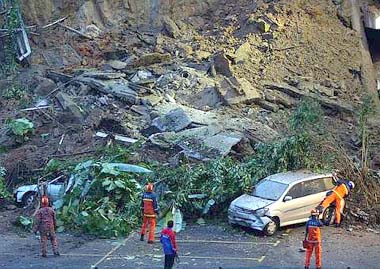 Rescuers go into action: Rescue personnel examining the carsburied and damaged by the landslide in Jalan Semantan, KualaLumpur, yesterday.

Six cars were buried in the landslide while five other vehicles were damaged.

The incident, which occurred around 5.20pm, caused massive traffic congestion until 10pm along Jalan Semantan leading to the city.

Authorities had to make sure the public stayed at a safe distance as chunks of earth kept falling off the wet slope, while water and mud were seen flowing down the slope continuously.

Several people from the Amanah Raya building said they heard a loud crash and felt the whole building shake as the retaining wall collapsed into the staff car park between the buildings.

Norhaliza Abdul Jalil, who works in the Amanah Raya building, said she did not realise that her car was crushed until she walked out of the building.

Meanwhile, CIMB group chief executive Datuk Seri Nazir Tun Razak said no one was injured in the incident and that the two buildings were evacuated as a precautionary measure. 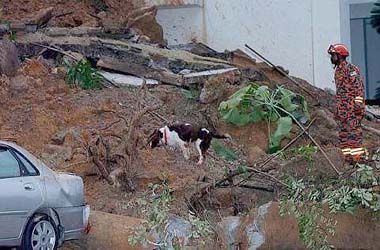 The Fire and Rescue Department’sSniffer Dog Unit searches for any trapped survivors.

“We want to ensure the safety of our employees which is why we evacuated both buildings,” he said.

Federal Territories Minister Datuk Zulhasnan Rafique, who arrived at the scene later, said the car park and Jalan Sri Semantan 1 located on top of the hill were closed pending investigation into the structural integrity of the wall.

“The investigation will be conducted by Kuala Lumpur City Hall, Public Works Department and the Public Works Institute,” he said.

Fire and Rescue Department operations commander Azizan Ismail said 47 firemen from the Sri Hartamas and Jalan Hang Tuah fire stations, together with 30 police officers from Brickfields, were deployed to the scene and began the clearing process.