PETALING JAYA: Asian and European markets rallied yesterday as the United States prepared to pump US$125bil (RM438.7bil) into nine of its biggest banks in a move to prevent a global financial meltdown.

The US Government’s investment in nine of the country’s biggest banks, including Citigroup and Goldman Sachs group Inc, comes after France, Germany, Spain, the Netherlands and Austria pledged 1.3 trillion euros (RM6.3tril) to guarantee bank loans and acquire stakes in the banks. 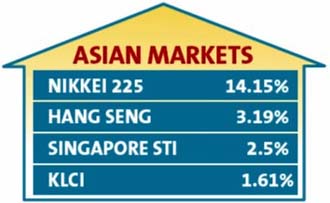 Investors’ sentiment was also boosted by the Australian Government’s announcement of a A$10.4bil (RM25.6bil) spending package to boost the economy as the global financial crisis freezes credit and slows growth.

Meanwhile, in Kuala Lumpur Finance Minister Datuk Seri Najib Tun Razak said the Government would announce on Monday new measures to strengthen the economy and urged the public not to panic.