TAIPING: Parliamentary and state constituencies have been allocated grants from the Tourism Ministry to encourage the setting up of more homestay facilities throughout the country.

There are only about 3,000 houses providing homestay facilities to tourists, she told reporters after launching The Great Durian Festival 2008 in Bukit Gantang yesterday. 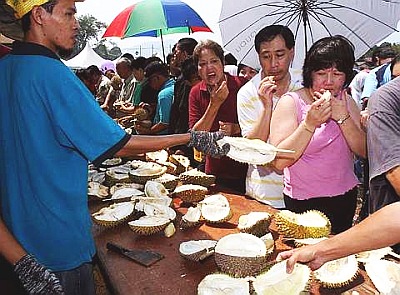 “Japanese and Korean tourists have given their thumbs-up to our homestay programme. I feel it should be expanded nationwide,” she said.

Earlier, Azalina said the durian festival should also include other tropical fruits such as mangosteen and jackfruit so visitors would have a wider choice to sample from.

Azalina said to encourage more visitors to Bukit Gantang, the Government had allocated RM500,000 which had been fully utilised and an additional RM200,000 had also been allocated to further improve Bukit Gantang's homestay infrastructure.

She said the ministry had allocated RM74mil to further develop tourism facilities in Perak under the Ninth Malaysia Plan,

“The decision to provide such an allocation shows that the federal government never overlooked the needs of states under opposition rule,” she said,