By SHAHANAAZ HABIB and STEVEN DANIEL

KUALA LUMPUR: The nephew of private investigator P. Balasubramaniam has lodged a police report expressing worry that his uncle, aunt and their three young children have gone missing and been un-contactable since Friday morning which is "highly unusual."

The 27-year-old R. Kumaresan who is Balasubramiam's late sister's son said he and his uncle's family are very close and contact each other almost on a daily basis. 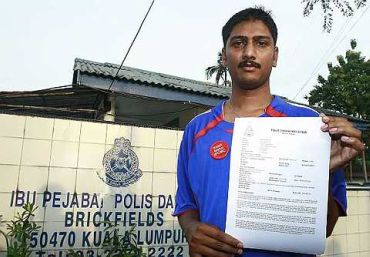 R. Kumaresan, nephew of P. Balasubramaniam, holding the police report he made at the Brickfields police station expressing worry that his uncle, aunt and their three children have gone missing.

He said he last spoke to his aunt, S. Sentamil, (Balasubramaniam's wife) on Thursday after the private eye had released his first statutory declaration at the PKR headquarters in which he alleged Abdul Razak Baginda had told him that the Deputy Prime Minister had a sexual relationship with Altantuya Shaariibuu.

"She sounded normal then. I asked her to call me if anything went wrong," he said Saturday after lodging the report at the Brickfields police station here.

However almost immediately after his uncle issued the second statutory declaration in which he retracted the first one, Kumaresan said he tried to reach his uncle and aunt many times but they did not pick up his calls.

"This is very unusual and has never happened before. I am very close to my uncle. There is no way they will simply cut off contact with me, " he said adding that he was very concerned about their safety.

Abdul Razak who is being charged for abetting in the murder of Altantuya in 2006 had earlier hired Balasubramaniam as his private eye because he said the Mongolian translator had been harassing him (Razak).

Balasubramaniam was one of the witnesses who had testified in the Altantuya murder case.

Kumaresan said when his uncle and aunt went incommunicado after the second statutory declaration, he went to their house in Rawang to check and saw their car was still there but the two dogs had not been fed or given water.

He said neighbours told him that his aunt had broken her normal routine to pick up the neighbour's children from school at noon which was very unusual.

Kumaresan also said he and his brother, Segar, called up all their relatives and friends but nobody knew his uncle, aunt and the children's whereabouts.

He did not believe that his uncle and family had gone into hiding because "I'm sure they would have picked up my calls".

"I don't think a person is going to hide because of a simple thing (like a statutory declaration)."

He said he wanted the police to inform him if they had detained his uncle and the family or what happened to them.

Kumaresan also disclosed that on July 1 after his uncle had prepared first statutory declaration (two days before it was released at the PKR headquarters), his uncle had met and given the original copy to his brother for safekeeping.

"He asked my brother, Segar, to show it to me and asked us to just wait and see and watch the TV because he (Balasubramaniam) was going to give a press conference."

"I'm not sure why he gave it to me. I think he gave me the copy (original statutory declaration) because it was against the Deputy Prime Minister," he said.

To a question, he said, his uncle did not give him instruction what to do with the statutory declaration should something have happened to him prior to its release.

He also said his uncle made no mention that his life was in danger.

To a question, Kumaresan admitted that his uncle had spoken to him a number of times about the Razak-Altantuya case.

Kumaresan's lawyer, N. Surendran, who was present at the police station said the authorities must inform the next of kin if they had "detained" Balasubramaniam and family and "return them to their loved ones."

"After the statutory declaration implicating the Deputy Prime Minister in a very serious manner, the sudden loss of contact is extremely worrying," he said.

PKR information chief Tian Chua who was also present at the police station said it was very puzzling that Balasubramaniam and family had gone missing after a very sensitive accusation was made.

He said this emphasised the need for a Whistle blowers and Witness Protection Act so that people who are in a vulnerable situation should be protected.