PETALING JAYA: A High Court judge here revealed that a former prime minister had threatened judges. Justice Datuk Ian H. C. Chin also said he and selected judges were sent to a boot camp to ensure they got the message.

Justice Chin said this before hearing an election petition challenging the results of the Sarikei parliamentary seat which was won by a Barisan Nasional candidate by just 51 votes.

In a report in the Borneo Post yesterday, that comes hot on the heels of the findings of the Royal Commission on the V.K. Lingam video clip, Justice Chin said the threat from the former prime minister came after he handed down two judgments in 1997.

One was a judgment on a libel case involving MGG Pillai and Tan Sri Vincent Tan where he refused to give what he considered to be an astronomical award. 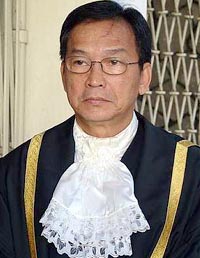 Justice Datuk Ian H. C. Chin... he and selected judges were sent to a boot camp to ensure they got the message

Justice Chin said the other judgment was in an election petition on Bukit Bangunan in the Sri Aman Division that he ruled in favour of Independent candidate Donald Lawan against Barisan Nasional candidate Mong Dagang.

“Shortly after the two judgments, the Judges Conference was held from April 24, 1997 where the then prime minister issued a thinly veiled threat to remove judges by referring them to a tribunal and stating that, though it may be difficult to do so, it was still done.”

Justice Chin said the former prime minister expressed unhappiness with what he termed ‘the Borneo Case’.

“Everyone knew which case he was referring to,” he added.

Justice Chin said after the threat, the former Prime Minister said people should pay heavily for libel and he only got a single response from a Court of Appeal judge who asked if he would be happy with a sum of RM1mil as damages for libel.

“He approved of it and later made known his satisfaction by promoting this judge (since deceased) to the Federal Court over many others who were senior to him.”

A month later, Justice Chin said he and select judges and judicial officers were packed off to a boot camp from May 26-30, 1997 where there was an attempt to indoctrinate them with the view “that the government interest was more important than all else.”

“Stating this devilish notion was no less a person than the President of the Court of Appeal. Everyone was quiet during the question sessions.”

Justice Chin added “the perversion of justice” continued and recounted an episode when a fellow judge Muhammad Kamil Awang told him he had received a telephone call from the then Chief Justice asking him to dismiss the election petition that he was going to hear in Kota Kinabalu.

“We went into the possibility of making a police report or of writing to the Chief Justice a letter to record what he had said over the telephone but in the end he decided against it since it would be his word against that of the Chief Justice,” he said.

Justice Chin said he was happy to later on learn that Kamil did not bow to the pressure and went on to hear the petition, thereafter making a decision based on law and evidence.

Justice Chin said he wanted the parties involved in the current petition and their counsel to hear his disclosure in case they wanted him to recuse himself.

The High Court judge said he had twice stood unsuccessfully as a Barisan Nasional candidate for a parliamentary and later for a state seat in Sabah in the 1980s and in one of those elections he was defeated by a DAP candidate.

“Now, though he is no longer the prime minister and so no longer able to carry out his threat to remove judges, the coalition party that he led is still around” and the second respondent was a Barisan candidate and “it may cross someone’s mind that I may have an axe to grind against the party concerned or any party thereof.”

To this, he said: “No amount of words from me would assuage you of your worry. You will have to read my judgments as to whether they are according to the evidence and the law or were influenced by threat.”

Chin then adjourned for half an hour to let the parties consider whether they wished to make any application for his recusal.

However, the parties – DAP’s Dr Wong Hua Seh and Barisan’s Ding Kuong Hiing – expressed their full confidence in him in presiding over the hearing of the case.

Tun Dr Mahathir Mohamad was prime minister at the relevant time. He was not available for comment yesterday.

Related Story:Bar Council: Get to the bottom of shocking disclosures

Errata:IN our report headlined “Judge's boot camp,” we inadvertently published that the suit between MGG Pillai and tycoon Tan Sri Vincent Tan was one of the cases which Justice Ian Chin heard in 1997 which had allegedly received certain degrees of threat from a former prime minister.

The original report by The Borneo Post, which we quoted in our article, did not say so. It said that Justice Chin in handing down a judgment in 1997 on the libel case (of Raveychandran v Lai Su Chon anors) had distinguished the MGG Pillai case (decided by another judge in 1995) and refused to give what he considered to be an astronomical award.

We apologise for the erroneous reporting.