She said she was shocked to hear about Dr Mahathir’s departure, considering that he was someone who always talked about being loyal to Umno. 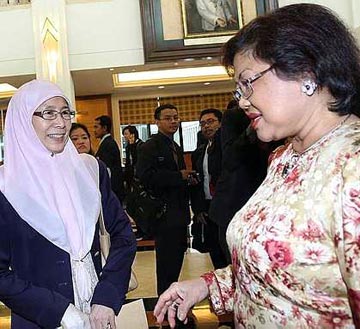 “We understand that the issues raised by Tun was about leadership but this is a process that must take place graciously and it should not come to (the level of) bringing people down.”

Rafidah said that Umno’s position as the backbone of the Government also had to be taken into consideration.

“What he did was to be disloyal but I think most members are still loyal and that everyone will remain calm,” she added.

He also urged party members to remain calm and loyal to the party in the light of recent developments.

“It is crucial for party members to remain steadfast and to strengthen Umno.

On Dr Mahathir’s move being capitalised by the Opposition, Mohd Ali said the Opposition would try to capitalise on every single issue if possible, including resorting to wearing turbans and songkok merely to entice support from the people.

All those in Umno and the Malay community too, he believed, were saddened by the sudden turn of events.

“After Dr Mahathir had led Umno for 22 years, his decision to leave the party is beyond expectations.

“On behalf of the state liaison committee and for the sake of our race, religion and country, I beg Tun Dr Mahathir to abandon his intention to leave so that we can together strengthen Umno and complete our unfinished struggles,” he said.

“Obviously Tun is sending a strong signal to Abdullah to step down and to take the power transition seriously,” he added.

Related Stories:No wave from ripple effectExpert: Dr Mahathir’s decision will hasten rise of Anwar Mukhriz Mahathir will not quit Umno Crisis in Umno getting worse, says Anwar Mat Taib: History not on Dr Mahathir’s side 156 quit in Kedah Umno MPs back Abdullah Umno can ride out the storm, says Koh Umno V-P Muhyiddin urges party members not to be emotional