MIRI: Two women claiming to be princesses from an ancient neighbouring empire have been detained by the Immigration Department after being found in a buffer zone between Malaysia and Brunei.

Both were remanded for 14 days yesterday by the magistrate’s court here to enable investigations to be carried out into their claim to be princesses from the Sunda Democratic Empire, which is not recognised by Malaysia

Puteri Lamia, 21, and Puteri Fathia, 23, who claim to be sisters, are being detained at the Central Police Station.

Their plight came to light after they sought help from motorists.

The “princesses” told the motorists that they had been trapped between Malaysia and Brunei in the 2km-long buffer zone for more than a week.

Several people informed Miri DAP chairman Fong Pau Teck and asked him to help the two women. Fong met the women at the buffer zone on Sunday night before Immigration authorities decided to bring them to Sarawak to investigate their claim.

“The ‘princesses’ said they were now living in Switzerland. They said they had wanted to tour the region – they wanted to go to Japan from Brunei but somehow ended up in trouble with Immigration authorities,” he said.

Police have declined to reveal further details on the women. 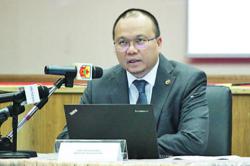 Gold up on unemployment claims