Cloud seeding over Sumatra until all fires are extinguished 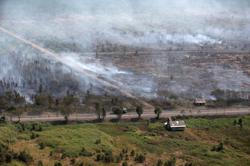 PEKANBARU: Cloud seeding to induce rain will be the main “weapon” for a multi-national force put into action to wipe out the remnants of fires in Sumatra.

The first sortie over parts of Sumatra by the Malaysian and Singaporean air forces began yesterday with each team concentrating on several areas.

Four Hercules C-130 planes, one each from Malaysia and Singapore, and two from Indonesia, will be carrying out cloud seeding over affected areas until the fires are extinguished.

Another Malaysian aircraft took off from Kuching and carried out a similar operation over West Kalimantan.

“We have all agreed to carry on with cloud seeding until we are sure the fires in the affected areas are put out.

“The rain over the weekend has helped a lot in reducing the risk of haze blowing over to our side but we want to be sure,” he told The Star.

Indonesian authorities said 27 hotspots had been detected in Riau and some of these were in the Mahato Forest Reserve in Rokan Hilir, the area worst affected by the fires this time around.

A representative of Riau Governor Wan Abu Bakar said the government would have to change the mindset of the people, especially the habit of burning when opening up land.

“Fires in Riau are like a toothache. When we have fires, we feel the pain but when the fires are put out, we forget all about it,” he said.

In a related development, Malaysian consul in Riau, Mohd Nasri A. Rahman said the 128 Malaysian fire-fighters and a SMART team battling the fires in Riau will withdraw from the area by tomorrow.

He said the Indonesian government had made the request as the fires in Riau had almost been put out.

“More than 70% of fires in the area designated to our team have been put out. We are confident that the fires in the remaining areas will be extinguished by then,” he said.

On the health of the fire-fighters who had reportedly fallen ill while on duty, he said they were all well and those who had been warded at the Pekanbaru hospital had been discharged.

Singapore consul in Riau Ajit Singh said all 54 fire-fighters from the republic who arrived last Thursday will also head for home.

Australia's emergency management team, led by Matthew Smith, who had been assessing the fires in Riau over the last three days, said the situation in the area had greatly improved.

“The recent rains have put out a lot of the fires. But we must remember that peat fires are hard to extinguish when left to burn for too long,” Smith said. 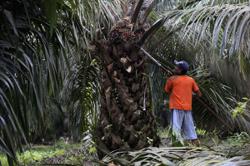