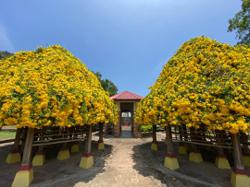 IPOH: It's the size of a 50 sen coin. But it could well reveal something about our prehistoric ancestors, possibly of the Neolithic period.

Researchers from the prehistory unit of the Department of Museums and Antiquities chanced upon the fragment of earthenware while exploring caves in the Kinta Valley recently.

“The piece is about the size of a 50 sen coin and it has visible geometric lines, which points to prehistoric activity there.

“We're excited with the find and the unit is now analysing the fragment to determine if it is from a prehistoric era, possibly Neolithic,” said Malaysian Karst Society executive officer Yap Ghee Hong yesterday.

He said old snail shells were also found in the cave whose location was being kept secret for now for fear that it would be vandalised.

“Finding these artefacts is an important step as it points to the unwritten history of our ancestors.

“If we can preserve the caves containing these artefacts, it will go a long way towards protecting our history as well,” he added.

Among the places visited during the expedition were Gunung Lang, Gua Datuk, Gunung Rapat and several cave temples.

The researchers sought help from the society, which is based here, to explore a few caves such as Gunung Kanthan, nicknamed “The Cathedral” because of its majestic limestone formations.

The caves of Perak have often been a rich store of prehistoric finds for Malaysian archaeologists and researchers in the past.

Khairy: M'sia to receive 875,000 doses of Pfizer, AstraZeneca vaccines from May 19 to June 1
Number of symptomatic Covid-19 cases rose to 50% in the past month, says Health Minister
MACC urged to expedite probe on timber concession in Negri Sembilan
Retiree who just wanted a special Raya with grandkids loses RM14,000 to scammer
Khairy: 2,800 vaccinations at WTCKL on May 15,16 to be rescheduled over congestion concerns
Dr M warns Covid-19 situation could worsen, urges public to be disciplined
Melaka police still investigating Awie over alleged Covid-19 SOP violation, no fine issued yet
Miti: Travel permission letter is for work only, abuse it and risk prosecution
Eight Abu Sayyaf members and their families rounded up in raid on mangrove swamp in Sabah's Beaufort district
Only Miti approval letter and either employers' letter or workers' tag needed to travel for work, says Miti