Raja Mahani: I did not order the killing

TAIPING: Raja Nor Mahani Raja Shahar Shah, who was given the chance to “clear the air” in the Hasleza Ishak murder, told a High Court she did not order the killing of her husband's second wife.

“I would not have ordered the killing as it would jeopardise my high position and mar the good name of my family and the state.

“I am not young. At 60, I think one's life should be stable. It should be directed at Allah and doing good things.

“With the knowledge that in our country no one is above the law, would I do something that is illegal?” she told Justice Mohd Noor Abdullah who asked her if she wanted to clear the air over the allegations that she was involved in the murder immediately after she had testified for her nephew Tengku Aristonsjah Tengku Mohamad Ansary.

They are being tried with carpenter Sabarudin Non, 34, and fisherman J. Manimaran, 27, who are charged with committing the murder between 6pm and 11pm at Km63, Jalan Sumpitan, in the Larut Matang and Selama district here on Oct 6, last year.

Earlier, Raja Mahani said she suspected that Hasleza, 26, had put a santau (evil spell) on her because of the drastic change in her husband's behaviour after marrying Hasleza in February last year, and because Hasleza came from Pantai Remis, a place notorious for its santau.

“First, I have to say something about my husband. Throughout our marriage, he had often been out of line but our household had never been invaded by supernatural beings.

“I never suffered strange illnesses and my husband never behaved so strangely. All these happened after he got married, and so I linked it to her,” she said during cross-examination.

Raja Mahani said she had asked Rahim to kill the santau because: “A santau is like a hantu (ghost) or pontianak (vampire). Normally, the person who sends a santau has a defence against it.

“Santau is a devil. That's why you have to kill it, so that it does not go anywhere else. Many people think that santau is the coughing of blood. The coughing is actually the result of the devil's doing,” she said.

In her examination-in-chief, Raja Mahani said unusual things started happening at the Istana Raja di-Hilir towards the end of April last year.

She said it began with large flies following her around the palace and she found a doll in a package buried outside her room.

Raja Mahani said it became obvious to her around May that her husband Raja Jaafar Raja Musa Aziz was resah (restless) and felt hangat (hot) staying at the palace.

“He would get up about 2am and leave the palace for about half an hour to two hours each time. This is so unexplainable.”

Raja Mahani said she consulted the Datuk Mufti of Perak over the strange happenings, and he confirmed that the palace 'kena sihir' (had been bewitched) and gave her and her husband some holy verses to recite.

Around August or September, she asked Rahim to find a bomoh who could cure the spell.

She said she handed over Hasleza's photograph and particulars which she got from her husband who told her about his marriage.

“I asked him to show me her picture. I felt it was unfair that people knew how I look like, as I am a public figure. So, I wanted to know how the other wife looked like,” she said. 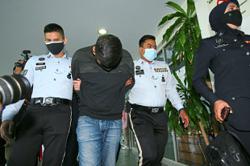