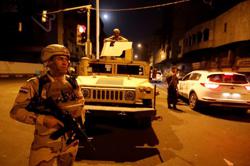 BAGHDAD: Six-year-old Yasmeen Tahir’s lips quiver and her eyes show fear. Despair is written all over her face.

She was asleep around 10.30pm on Friday when bombs hit the side of the building where her family lived.

Windows shattered, cars were smashed and the frightening noise went on non-stop.

Her mother held her, stroked her hair and tried to comfort her, but the little girl just would not stop crying.

When asked about the Friday night bombings in the Palestinian village of Baladiat, about 10km from here, tears welled up in Yasmeen's eyes, and she moved a few steps backward, clasped her hands together and looked down to the ground.

Sameer Yusof, a fellow villager, hugged Yasmeen to comfort her and coaxed the child into telling what she had heard and what she thought was happening.

“It was very noisy. I was scared. He came to bomb us,” she said, gripping her hands hard. as she recalled the incident.

Asked who came to bomb them, Yasmeen said without any prompting: “Bush (US President George W. Bush) and the Jews.”

Friday night was when the battle for the city started and there was heavy bombing and artillery fire, particularly in the south as the US-led forces engaged the Iraqi army.

A very angry Hodah Muhammad, also from Baladiat, yelled curses at Bush for the attack.

“That Bush is a very, very bad man. He hates all babies and children. The children here were all screaming. They were shivering and became very sick. The children are now so frightened that they cannot eat anything. Allah will punish him,” she said.

Little Ibrahim Ruid clutched his father’s hand and leaned on to him for support when asked about the bombings.

All the five-year-old could say was that he cried all night and was afraid that “more bombs will come tonight (Saturday night).”

Another villager Mohamad Ramadhan shouted: “Is this what you call democracy, Bush? Where is freedom? A hundred thousand Palestinians were killed by Israel and where was America?

“Where was America in Amaria (a bomb shelter in Iraq that was bombed in 1991, killing 400, mostly women and children), Jenin or Nablis (in Palestine)?

“When the United Nations wanted to send a team to see the massacre of Palestinians in Jenin by Israel, the United States vetoed that decision. Now they want to free the people of Iraq? Who believes them?”

Personnel at the Al Kindi Hospital and other hospitals in the city were busy bringing in the injured.

Falah Majid was at the Al Karim Mosque performing his Friday prayers when he was hit during crossfire between Iraqi and US forces.

According to him, he looked up after being hit and saw an Apache helicopter flying low, firing rockets randomly, while there were children and women around.

“In the newspapers and television, Bush said America is fighting only the Iraqi army, not the people.

“Then why bomb the mosque? They are savages. Many women and children are now so afraid,” he said from his hospital bed.

Falah’s brother Sabah comforted the man on the next bed, who was in much pain and looked almost close to his death.

In between the moans, he said: “I must go. I have to help the people of Iraq.” 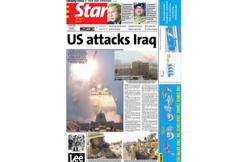