SEPANG: The Transport Ministry will open tenders to international companies for the baggage handling system at the KL International Airport (KLIA) in two to three weeks.

It’s minister Datuk Seri Dr Ling Liong Sik said the major tender exercise was “a much welcomed development” as it would see improvement to the baggage handling system which had seen some glitches recently.

Speaking to reporters after a meeting with the airport authorities including Malaysia Airports Berhad and Malaysia Airlines on the problems of the system yesterday, he said some international companies had shown interest in the tender.

Dr Ling, who said the baggage handling system using a Japanese model cost RM400mil, added that the company which won the tender may install a new system and train Malaysia Airports staff to run it, or modify and adapt the present system so that the entire system would be more orderly.

He said baggage movement was expected to be speeded up from the present 25 minutes to a targeted 10 minutes.

Dr Ling also said the meeting yesterday had identified some of the core issues including staff and system problems which resulted in glitches in the baggage handling system.

Immediate steps to be taken, he said, included retraining and training as the problems were due to inexperienced staff.

“The problems we identified are solvable and we are looking into these problems with a sense of urgency,” he added. 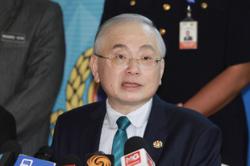