Partyless Richard has decided on future 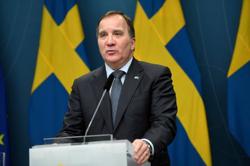 KUCHING: Limbang assemblyman Richard Wong Shoon Fook, who is without a party since the Sarawak National Party (SNAP) was deregistered last November, has made a decision on his new political affiliation.

However, he is not about to disclose the name of the party he plans to join.

“There is no hurry to announce my decision. I may do it by the end of this month,” he said.

Richard’s father, Datuk Amar James Wong Kim Min, was party president when the Registrar of Societies struck SNAP off its list for allegedly failing to resolve an internal dispute.

Cops in Perak arrest five men for gambling on Wednesday (June 16) night
OKU Sentral drive-through PPV to boost capacity to 40,000 shots in five months
High spikes in registration as vaccinations revved up
INTERACTIVE: Letting Go - How Parents of Young Autistic Adults are Teaching Independence
Govt’s intention in line with King’s call, says Azmin
Johor and Penang ready to reconvene when possible
‘Virtual meet not as fruitful’
Plans in the works for walk-ins
Eating when and where they can
I miss all the footie fans, laments eatery owner