By LOURDES CHARLES And ANDREW SAGAYAM 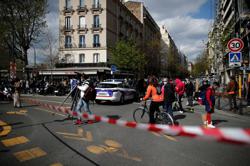 By LOURDES CHARLES and ANDREW SAGAYAM

KUALA LUMPUR: Businessman Tan Hock Low who was recently stripped of his datukship by the Sultan of Selangor was gunned down mafia style at a well-known restaurant in Jalan Imbi last night.

Sources said Tan, 38, from Banting, Selangor was shot four times by one of two gunmen at 10.15pm while dining with three other people.

One of them, said to be his bodyguard, was also shot and wounded by the gunmen. Tan was pronounced dead upon arrival at Gleneagles Medical Centre in Ampang.

City chief police officer Deputy Comm Datuk Dell Akhbar Khan confirmed the shooting of a businessman who had been recently stripped of his title.

He said the businessman and the three people were seated at a corner when the two men approached them.

“One of the two men took out a pistol and fired a shot at the businessman who tried to escape.

“The gunmen then fired several more shots at the businessman before shooting at the bodyguard and fleeing via the side exit,” he said. His two other friends managed to escape.

The bodyguard is said to be undergoing surgery and was in critical condition at press time.

DCP Dell said that the patrons scurried out of the restaurant as soon as the gunmen fired the shots. It is learnt that a waitress suffered cuts and bruises caused by splinters from the shots which also shattered a glass panel. She sought treatment at a nearby clinic.

Tan was involved in the transportation, mining and sand businesses.

It was reported on Nov 28 that Tan was stripped of his datukship for “improper conduct not befitting the title conferred on him.”