Will Covid-19 transform our cultural events in the future? 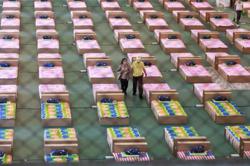 IT has become obvious to most observers that the current waves of Covid-19 infections in Asia coincide with the occurrence of large cultural festivals.

While the fault certainly does not lie with the festival itself, the resulting crowds of people often raise the potential for a rapid and intensive spread of Covid-19 infections.

This was recently exemplified in the case of India, with record-breaking numbers of infections following not only election rallies but also the Kumbh Mela festival. This has led to a tragic loss of life due to a lack of medical infrastructure.

Within South-East Asia alone, some parallels are seen among cultural festivities occurring during the month of April 2021.

Ramadan, which lasts for a month and culminating with Hari Raya Aidil Fitri or Eid, is an important event as Islam is the most widespread religion in the region, making up more than 40% of all South-East Asians.

On a smaller but nonetheless significant scale among Indochinese nations, the celebration of the traditional solar new year is another significant festival that has been celebrated in numerous forms. They include Songkran (Thailand), Pi Mai (Laos), Thingyan (Myanmar) and also Choul Chnam Thmey (Cambodia).

What is informative is that each of these events occurred during a period just before the most recent waves of Covid-19 infections in their respective countries. From May 2021 onward, countries such as Thailand and Malaysia experienced their worst outbreaks ever since the pandemic began. Cambodia, Laos and Myanmar have also experienced surges, although relatively smaller in terms of actual numbers.

These outbreaks are even more troubling as they emerged despite having varying restrictions in place. While part of the reason for the waves of infection lies with the emergence of new variants of Covid-19 and the slow rate of vaccinations throughout South-East Asia, one cannot help but notice the conspicuous chain of festive events that happened just before.

By virtue of their highly social nature, festive events tend to weaken and relax our expectations of everyday life. Anthropologically speaking, cultural festivals are liminal events, a period of time that is betwixt and between what we consider to be typically structured as “normal”.

In other words, the routines in our daily lives are suspended from their daily grind during such moments. Such liminality also affects how public spaces are perceived and used. And while they vary in character from culture to culture, in present times, they commonly appear in the form of holidays and traditional celebrations that blend memory, emotion, spectacle and ludic activity.

This is precisely why festivals are attractive to most people, as they offer a respite from the realities of the “normal”. Unfortunately, however, they also prove to be the site of rapid contagion during a pandemic. It is, therefore, important to recognise that festivals represent a real test for policymakers in pandemics.

While the risks of allowing them to go on are certainly recognised, it also seems to be a difficult decision to completely prevent them, whether it be based on political expediency or the deep significance they hold for the public. They often represent a dilemma for governments as there is the risk of a backlash from the public if not managed well. At the same time, societies that have already undergone a prolonged period of alertness in the form of lockdowns are particularly vulnerable, as pandemic fatigue will often be high, and festivals are a useful way of recovering parts of our lives that remind us of a time before Covid-19.

The liminal aspects of any impending festival are then, understandably, more than welcome among many people, who are ultimately social beings. But this is also most likely a time when our guard is down. For there has never been anything socially natural about the “new normal”, and festivals or similar events are an instinctive way of pushing back on restrictions. This applies to most contexts, be it among elites or ordinary citizens.

Examples can be seen in the case of Thailand, where Bangkok’s pre-Songkran nightlife among privileged locals played a role in igniting the country’s latest and deadliest wave of infections. On the other hand, the mass appeal of Malaysian urban night bazaars throughout Ramadan preceded their current crisis.

We are, then, faced with a dilemma in this continuing fight against the pandemic. Just how far should we go in the conduct of festivals, which have been a large part of our identities and lives? Do we cancel the next Lunar New Year? Or the next Songkran or Deepavali?

Perhaps part of the answer lies in accepting that we have to learn to live with Covid-19 while also remembering that we should not necessarily die because of it. There will be no absolute outcomes from our choices: only better or worse ones.

Hence, it might be wiser to let go of a part of one’s life that existed before the pandemic in order to keep the rest of it. And governments need to realise that winning elections is now less important than saving lives. Fighting pandemics through lockdowns, quarantine, social distancing and vaccines are a necessary strategy to contain, or at least slow the rate of infections in all affected countries. However, what is most difficult to overcome may not be the coronavirus but our very own human nature. — The Jakarta Post/ANN 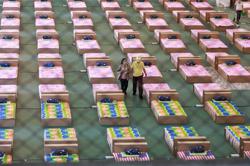