High stakes: Flowers for Myanmar’s anti-coup protesters left outside the Asean building in Jakarta. The world will be watching with strong anticipation about what Asean has to offer to end the Myanmar crisis. — Reuters

ASEAN has been widely criticised, perhaps unfairly, for its failure to come up with any significant initiatives to stop the violence in Myanmar, one of its members, which erupted when the military grabbed power from civilian hands in February.

The violent crackdown against protesters by the military, now almost a daily occurrence, is making a complete mockery of all the humanitarian values contained in the Asean Charter that members have pledged to adhere.

The junta obviously has no regard for the lives of its people and no respect for global public opinion, which has swiftly condemned its brutal actions. This has put the other Asean members in a quandary.

The world is turning to Asean and its members to take the lead to end the violence and help restore democracy and civilian rule.

This is to be expected. If anyone can make a difference to the situation on the ground in Myanmar, it should be first and foremost its immediate neighbors.

Some analysts have wrongly attributed Asean’s impotence to the principle of non-interference in the domestic affairs of other members. Indonesia, Singapore and Malaysia have waived this principle in condemning the Myanmar junta and to call for the protection of civilian lives.

The real problem facing Asean is in its decision-making mechanism, which requires a consensus from all 10-member countries. It takes only one member to object to any initiative and it’s a no-go.

The United Nations Security Council (UNSC) has been equally dysfunctional when it comes to stopping the Myanmar violence.

Although the 20-member council makes decisions and resolutions by voting, some of the five permanent members have used their veto right, effectively preventing the UN from doing more.

It has taken more than two months after the coup for UNSC to finally issue a strong resolution on Myanmar last week, condemning the use of violence against peaceful protesters and for the deaths of hundreds of civilians, including women and children. Those familiar with negotiations behind the 2007 Asean Charter would recall how some member countries watered down what began as a very progressive document – promoting various freedoms and democracy – drafted by the group’s eminent persons.

The same happened with the Asean Human Rights Declaration adopted in 2012. The turn of events in Myanmar this year further showcases the limitations of these and many other lauded Asean documents in dealing with a major crisis in the region. Asean has also struggled to come up with joint statements on almost anything because they have to be approved first by every single member. Even press releases from its secretariat in Jakarta are subjected to this process.

The consensus requirement makes sure the process is slow, and oftentimes, the statements would come out weak and not as principled they should. Cases in point are the communiqués issued at the end of the annual Asean foreign ministers’ meetings. In recent years, paragraphs referring to the tensions in the South China Sea would not only be buried in a long statement, but they would also be carefully worded. Insiders say the South China Sea tension is among the most fiercely fought over topics among the ministers.

Asean has actually come up with the “Asean Minus-X” formula to circumvent the need for a consensus, but unfortunately, this is only applicable in economic affairs. President Joko “Jokowi” Widodo has called for an emergency Asean Summit later this month to discuss the Myanmar crisis.

(Brunei, the chair of Asean on Monday threw its support behind the plan for a regional leaders’ meeting to discuss the issue of Myanmar at the Asean secretariat in Jakarta. However, no date has been set.)

It is not clear at this stage who will represent Myanmar, but allowing the junta to take up the seat would not only send the wrong signal to the world; it would also ensure that the meeting would end in disaster precisely because of the need for a consensus. One possible way of avoiding this problem is by temporarily suspending of Myanmar’s membership and then invite representatives of both the military junta and the National League for Democracy, which won the November election, to the summit.

Because Indonesia has already violated the Asean noninterference principle in calling for the summit, it should go further by circumventing the consensus mechanism during the meeting to ensure that the leaders come up with substantive proposals to end the crisis.

Asean leaders could either put the decision to a vote or use the Asean Minus-X mechanism to prevent one or more members to botch down any initiative members countries may bring. The summit is too important to end in failure – for the people of Myanmar and for Asean.

The world will be watching with strong anticipation about what Indonesia and other Asean members have to offer to end the Myanmar crisis.

But Indonesia should be doing this for its own interests. Asean’s future is at stake, and with it the plan to turn Asean into a community.

A prolonged crisis in Myanmar would not only destabilise the country, but also the rest of the region. The burden falls on Indonesia as the largest member in Asean to come up with the initiatives to break out of the current impasse. — The Jakarta Post/ANN 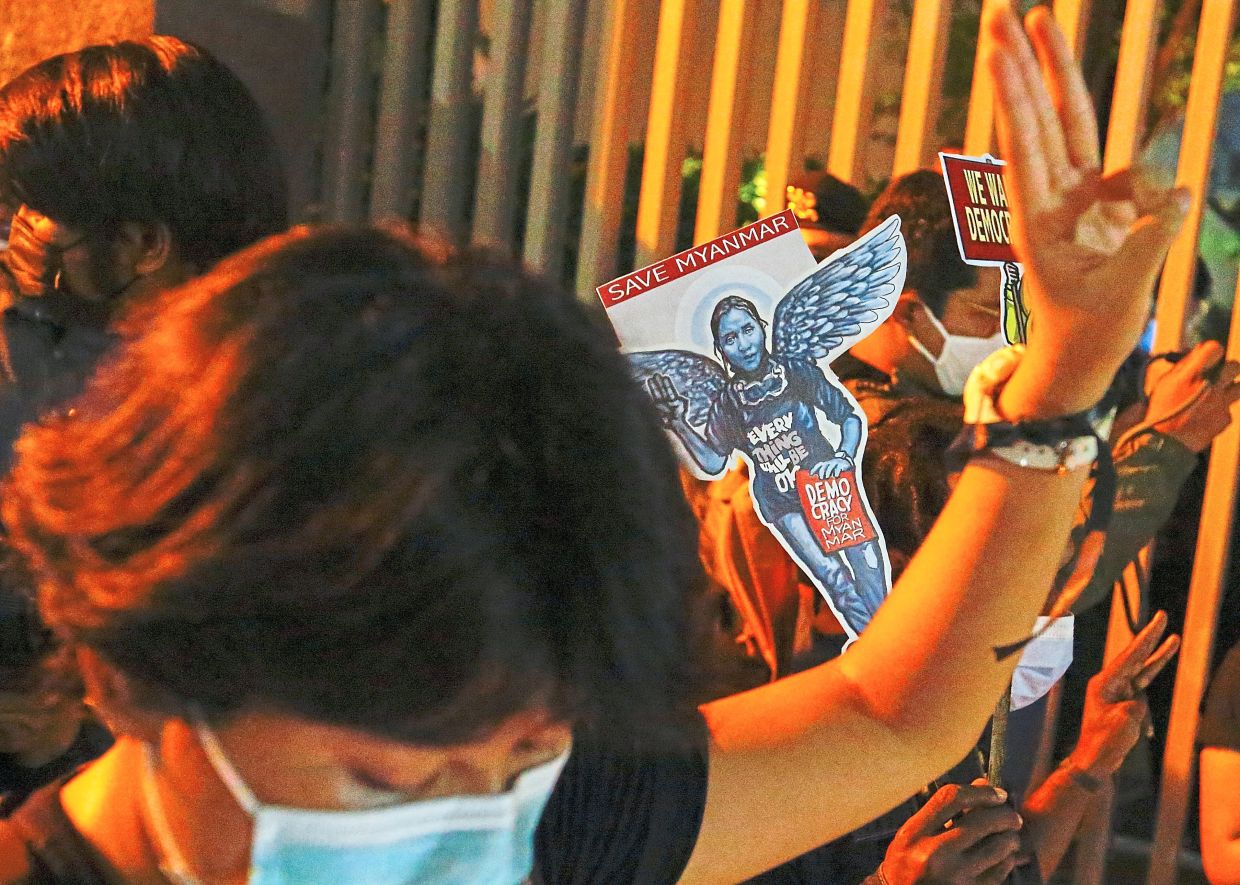 Protesters remembering Angel, also known as Kyal Sin, who was shot during a protest against the military coup in Myanmar, outside the Asean building in Jakarta. — Reuters