More calls for help in MCO 2.0

IT’S been a bumpy start in 2021 for Malaysians, with the return of the movement control order (MCO) in most states.

The second round of MCO, or MCO2.0 has also been recently extended for another two weeks until Feb 18.

Coupled with daily Covid-19 cases still stuck in four figures, the situation can feel overwhelming and uncertain for many.

People have been ringing up helplines for emotional support, with several services receiving more calls in a day.

Calls to the psychosocial support helpline run by the Health Ministry and Mercy Malaysia have doubled so far this year compared to last year.

“The frequency of calls have increased to an average of 25 to 30 calls a day. 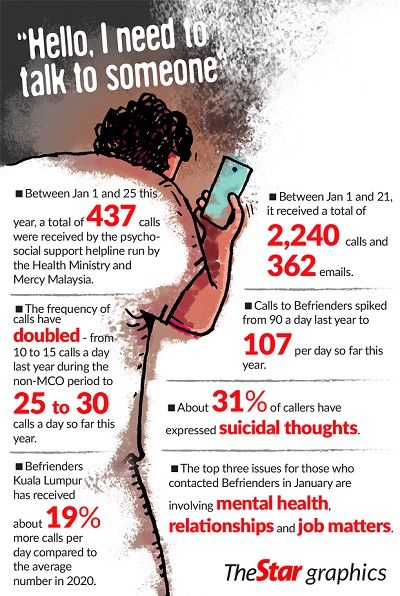 The helpline, set up on March 25,2020, is manned by the ministry’s psychology officers and Mercy Malaysia volunteers and is still ongoing.

Most or 63.7% of callers required emotional support from feeling stressed, worried, anxious, sad, hopeless and helpless due to uncertainty about the future.

Some also face interpersonal conflicts and vented that they were unable to reach authorities at hotlines.

“The pandemic has caused mental health problems which are influenced by social factors.

With various changes like adapting to new norms, quarantine and changes in daily activities, this can result in depression, substance and alcohol abuse, domestic violence, self-harm and suicidal behaviour.

“The economic impact among vulnerable populations needs to be addressed in an integrated manner, ” he adds. 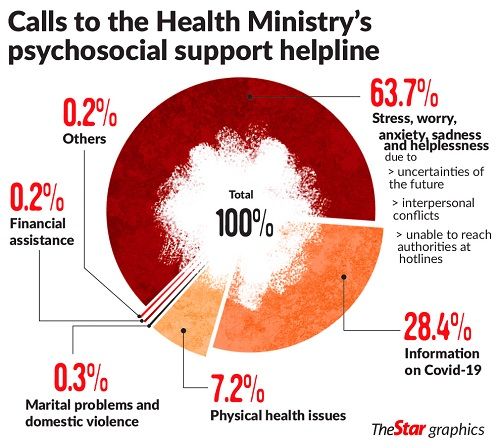 More people have also turned to Befrienders Kuala Lumpur for a listening ear.

The helpline has received about 19% more calls per day so far this year, compared to the average number in 2020.

For emails, however, there was a slight decrease, with Befrienders receiving a total of 362, or 17 a day so far this year compared to 21 a day last year.

“The top three issues for those who contacted us in January are involving mental health, relationships and job matters, ” Ardy says.

Around 31% of callers have expressed suicidal thoughts.

Ardy admits that there have been frontliners, including medical workers who have reached out to Befrienders.

“Most of them are suffering from mental and physical exhaustion, while some are experiencing high levels of stress and anxiety, ” he reveals.

MCO 2.0 was first imposed from Jan 13 in several states for a period of two weeks, and was initially supposed to end on Jan 26.

It was extended to all states and the Federal Territories, except Sarawak, until Feb 4 and subsequently Feb 18.

Malaysia is expected to begin its first round of Covid-19 vaccinations in March. But even with the vaccination plan in place, it does not necessarily mean the number of troubled callers will drop.

“At this point in time, it is difficult to say.

“Although the government may announce the vaccination plan, there would still be individuals among society that may have uncertainties.

“We anticipate there would be calls in relation to worry and anxiety about the vaccine such as its efficacy, safety, side effects and so on, ” says Dr Noor Hisham.

He says there is a need to increase coverage of mental health support services at the community level with the involvement of all ministries, agencies and NGOs.

“Increased human resources such as community counselors and social officers at the community level would be valuable to help alleviate psychosocial issues, ” he adds.

The ministry has constantly disseminated information on mental health through its social media platforms.

“We have also spread awareness on how to cope with stress such as talking to someone that can be trusted about their worries and problems, staying socially connected, adapting to new norms and handling anger.

“It is our hope that the public will be empowered to practise a healthy lifestyle, be physically active, eat healthily, do not smoke and practise deep breathing to stay calm, ” Noor Hisham says.

Concurring, Ardy says there is a growing exhaustion among the public from the pandemic, and so, it is important to ensure that people find ways to keep fit, mentally and physically.

“We have to look at this as a long term challenge, something that we have to adapt in order to cope, ” he says.

Stress, anxiety, anger, frustration, loneliness, and many more negative emotions may surface and affect the state of our minds during such hard times, notes Ardy.

“Validate those feelings, by understanding the cause of them, as most of the time, they are caused by external factors or things that you may not have control over.

“One way of dealing with this is by talking to someone about it, as having a solid support system can go a long way in improving your mental health.

“And if you find that social media is causing you too much stress and anxiety, do limit the time you spend on them, ” Ardy advises.

He says Befrienders continues to provide emotional support to anyone who is feeling distressed and suicidal, even during the MCO, 24-hours a day, seven-day a week.

“But with many calls coming in on a daily basis, there will be times when all the lines are engaged, and your calls are not being answered.

“Please do not give up hope, and do call again whenever possible, ” he urges.

Take things one day at a time, say experts