Seeking jobs in the new normal

IT’S back to business, but not business as usual yet.The conditional movement control order (CMCO) has allowed businesses to open again to recover the economy.

But it’s still an uphill battle for those who are seeking jobs or recently made jobless.

In fact, more have become unemployed, with the unemployment rate rising to 3.9% in March from 3.3% in February.

This is the highest rate recorded since June 2010 when it stood at 3.6%, according on the latest data from the Department of Statistics Malaysia (DOSM) on Friday.

“The high unemployment rate in March reflects the negative impact of MCO on the labour market, ” read the department’s report.

Such a tough job market is not about to end soon, and may last until next year, says the Malaysian Employers Federation (MEF).

“Most employers are not in the mood to hire. It’s the last thing on their minds with the current economy.

“Some are also planning to offload or retrench staff.

“This is the reality now and it can go on for some time, maybe until next year, ” says MEF executive director Datuk Shamsuddin Bardan.

However, some businesses are still hiring, especially for delivery services and sectors involving essential goods like food.

But with the new normal, employers are expected to have a leaner workforce, with bigger reliance on technology.

Recently, it was reported that the number of jobless Malaysians would triple, based on a projection by Bank Negara.

Datuk Seri Mustapa Mohamed, the Minister in the Prime Minister’s Department in charge of the economy, had said the unemployment figure would reach 1.8 million people.

As of March, there are 610,500 unemployed people in Malaysia.

About 40% of small and medium-sized enterprises (SMEs) are also terminating workers to stay afloat. 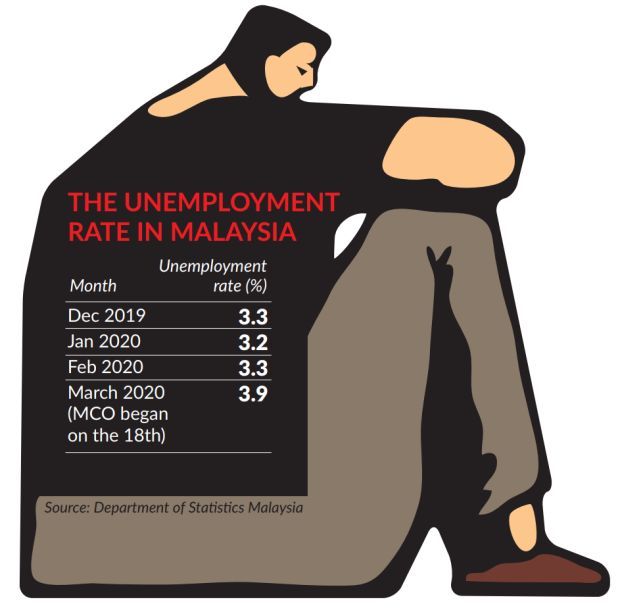 This is based on a recent survey done by the SME Association of Malaysia, says its president Datuk Michael Kang.

“The remaining 60% are not retrenching but some have either put a freeze on hiring or imposed pay cuts, ” he says.

Some SMEs do hire people still, but only in small numbers and depending on the industry, Kang adds.

“Such industries involve essential goods and services like manufacturers of food products, medical gear like gloves and the information technology sector, ” he says.

Kang urges employees to work together with their bosses to sail through the current challenging economy, even if it means taking a pay cut.

“There’s little room to bargain during such times.

“It is more important for workers to help sustain businesses so that we can overcome this and grow together, ” he says.

Things are also tough for self-employed workers, with 46.6% losing their jobs based on a special survey by the DOSM on the effects of Covid-19 on the economy and individuals.

The agriculture and services sectors had the highest percentage of job losses compared to other sectors with 21.9% and 15% respectively.

Shamsuddin hopes the government will incentivise employers not to retrench workers.

“The current programme to subsidise wages is small compared to other countries which have up to 80%.

At present, the wage subsidy programme offers a subsidy of 19% of total wages in the formal private sector per month.

However, Shamsuddin notes that there are some businesses like delivery services which are flourishing.

“There is a projection for growth in this area, together with gig work or independent, temporary workers, ” he says.

Over on professional networking platform LinkedIn, there are also some opportunities offered by employers for a variety of jobs and roles in Malaysia.

“There have been close to 26,000 job postings over the past month, with over 4,000 entry-level or associate-level jobs on our platform, ” says LinkedIn (Asia Pacific and China) managing director and vice-president Olivier Legrand.

The food and beverage (F&B) industry has the most postings for jobs, with openings available across the country, he tells Sunday Star.“For example, there were close to 8,000 job openings from just two F&B companies during this period.

“We are seeing mid-senior, associate and entry-level jobs including in-store and customer-facing roles such as supervisors, chefs, baristas and food delivery, ” he adds.

Looking ahead, more employers and job seekers are expected to use more virtual and online tools as part of the hiring process and managing teams, says Legrand.

Since January, “remote working” searches on LinkedIn Learning have tripled as more employees and managers look for advice on how to navigate the challenges of working remotely and managing a remote workforce.

“We are most likely to see a rise in remote jobs that don’t require an employee to work from an office premise.

Diving into the unknown