NECESSITY may be the mother of invention for some but other reasons can drive creativity, too.

Growing up in Perak in the 1970s, she watched her father work extremely hard as a rubber tapper on a smallholding to feed his family. It is a memory that has left an indelible mark on her soul. That, coupled with the desire to lift rubber tappers out of the doldrums they are currently in, drove Dr Nazirah to work with her team to answer the MRB’s call and innovate a product that is a world first.

They came up with cuplump modified bitumen (CMB), an aggregate that can be used with other components to construct roads. Cuplump is basically the dried rubber lump that forms in the cup tied to the rubber tree into which latex drips. All rubber smallholders in Malaysia use this collection method rather than collecting liquid latex.

“This is the first of its kind in the world and we have patented it, ” said Dr Nazirah, who is the project leader.

“It is considered a real success but we will only be happy if the various authorities and private roadbuilders use CMB to build roads in Malaysia.”

The MRB has been very concerned about dropping rubber prices which have resulted in much hardship for rural Malaysians. This government agency is tasked not only with increasing the rubber yield on smallholdings but also finding ways in which the demand for cuplump rubber could shoot up.

Dr Nazirah said the government is also concerned about the subsidy it has been giving out since 2014 to smallholders every time the price drops below RM2.50 per kilo for cuplump rubber, realising that this could not go on forever. 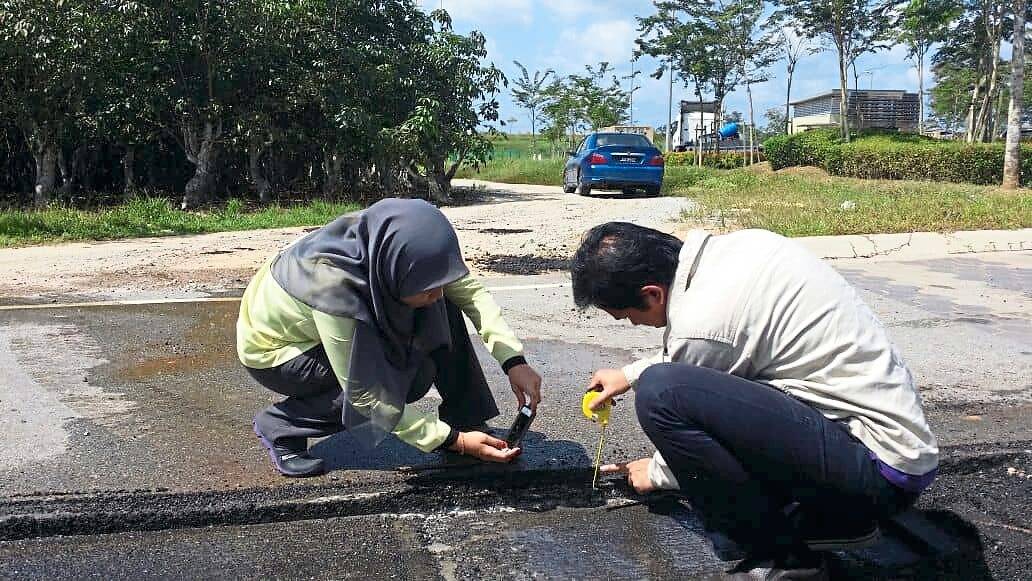 Mahirah making sure the aggregate mix and road height is correct on the test road.

“We started in early 2014 and by the end of that year, we had completed innovating the CMB and tests showed we were ready to start laying trial roads.

“We were excited as we had created something that could eventually boost the lives of the smallholders if the technique is used fully, ” Dr Nazirah said in a recent interview.

“Making smallholders self-sufficient is also a way of giving them back their dignity.”

She emphasised that more than 90% of the rubber producers in Malaysia are smallholders and all of them produce cuplumps, as the logistics involved in transporting liquid latex are costly and cumbersome for smallholders.

“So we thought that using CMB instead of the conventional rubber and other polymers that are being currently used to mix with bitumen would not change the quality of the roads.

“We successfully proved that the performance grade of the CMB is just as good as the conventional aggregates. This was the first step before moving on to field tests. Kok (in red) being briefed on CMB and how it is used in building roads by MRB chairman Datuk Sankara Nair.

“We have laid out roads in stretches in many parts of the country, including the stretch leading to our Parliament. These tests have been ongoing for the last three years and we check every three months.

“We are monitoring closely and preparing regular reports on all these stretches.”

Dr Mazlina Mustapha Kamal, who was also on the team, said once tests are acceptable and it is proven that the quality and durability of these roads are just the same, if not better, as conventional roads, the industry will be heading for a boost that the smallholders have not seen in a long time.

She said MRB is working with the Federal Public Works Department (PWD) on the road construction, which has involved some hard work on the part of her team, but added that the challenge is worth it.

Mahirah Mohd Idris, another team member, said they had to work under the scorching sun daily to measure the height of the roads being constructed and ensure that the mixing of all aggregates meets specifications.

“After four years of trial runs, our endeavours have been fairly successful. Of course there were some issues but these are expected, as in any trials, ” she said.

Dr Nazirah explained that these complaints were because of construction defects and had nothing to do with the quality of CMB:

“It’s like baking a cake, if the ingredients are not measured properly before baking, you won’t get a perfect cake.”

Among the scientists involved in the project are (from left) project leader Dr Nazirah Ahmad, Dr Mazlina Mustapha Kamal and Mahirah Mohd Idris.

Dr Nazirah said it was not an easy task to promote the use of CMB to the relevant government agencies that build roads in the country, as they were concerned about higher costs and long-term durability.

“In any production, the cost is related to volume of demand. Right now the total length of CMB roads we have constructed is only about 50km. Obviously, the cost per km of construction will be high.

“But Malaysia has a road network of more than 200,000km, which is a huge market for us to exploit in the interest of the smallholders directly and the rubber industry as a whole.

“And while bringing down the cost, it will increase the revenue of smallholders substantially.

“Besides PWD, the largest roadbuilders in Malaysia is UEM. If we slowly but surely convert these roads to CMB material, we are talking business here, ” she said.

Kuala Lumpur City Hall has agreed to work with MRB to use CMB widely in its road networks, which will give CMB a major boost, Dr Nazirah said.

Primary Industries Minister Teresa Kok said she is pushing hard for the government to use CMB for road construction in the country eventually. “This year, the Finance Ministry has budgeted RM100mil for this purpose. It will surely be successful and in the interest of the smallholders, we must do this.”

For their innovation, the MRB science was given a special award by the government recently. The others in the team are Dr Ruhida Ab Rahim, Nik Zakaria Nik Yahya, Mohd Khairulniza Mansor and Kamarularifin Hadithon.

K. Parkaran was a deputy editor at The Star and producer at Aljazeera TV.