No solution to coal

China’s answer to carbon emissions from its expanding coal use has a downside.

THE new coal plant in Hexigten Qi is an industrial fortress of boilers, tanks and towers that stretches across a lonely plateau in Inner Mongolia. All day long and through the night, it vents huge grey clouds of steam and emits an awful stench.

Though it may seem odd, this is part of China’s campaign to combat the nation’s notorious urban smog. The plant transforms low-grade coal into a cleaner-burning methane gas that can be piped to cities, replacing dirtier fuels that now are used to cook meals, heat homes and produce electricity.

The Chinese leadership has called for the accelerated development of these coal-to-gas plants, and more are under construction in areas distant from major urban centres. But embracing this technology to fight air pollution involves a serious environmental trade-off. The plants that produce this gas spew far more carbon emissions than those that burn coal to generate electricity.

“They’re going to lock in emissions. China, and the world, will bear the consequences for decades,” said Robert Jackson, professor of environment and energy at Stanford University.

A study published last year in Energy Policy found that producing, transporting and combusting this coal-generated gas results in up to 82% more carbon emissions than burning China’s coal directly to generate electricity. If all the plants with initial government approval are built, they could boost the nation’s annual carbon emissions by more than 7% over 2012 levels, according to an analysis by a co-author of that study.

Such large-scale development would be a significant blow to global efforts to curb CO2 emissions, which already are changing the planet’s climate and causing the oceans to become more acidic. Those emissions are climbing at rates that pose far more severe risks to the planet, and reversing that trend is heavily dependent on China making cuts in its carbon emissions. Changing landscape: Some grazing lands have been lost to coal development in Inner Mongolia in China. This herder has found forage for his goats in the patches of vegetation sandwiched between this coal plant and a nearby open-pit mine. — MCT photos

The gas plants are part of a broader expansion of the Chinese coal industry in Inner Mongolia and other provinces in the north and west. That development includes large electrical power plants, as well as refineries that turn coal into chemicals. These plants could help keep China’s total coal consumption steady – or edging higher – even as the government cracks down on coal use in 12 populous provinces and dramatically expands reliance on zero-carbon fuels such as nuclear energy, hydroelectric, wind and solar.

Chinese government officials acknowledge that carbon emissions are a serious long-term threat to the nation. But dirty air is the front-burner environmental issue in China. Air pollution is cutting an average of more than five years from the life expectancy of some 500 million northern Chinese people, according to an analysis published last year in The Proceedings of the US National Academy of Sciences.

Much of the urban smog comes from using coal to cook, heat homes, generate electricity and power industry. By contrast, methane – the prime component of natural gas – burns much cleaner than coal, helping to reduce smog and improve indoor-air quality fouled by coal-fired stoves. But China’s petroleum companies can’t meet the demand for methane from traditional gas fields and lag far behind their US counterparts in developing new reserves through fracking. While China buys increasing amounts of gas from other nations, the government is wary of becoming too dependent on imports. So China’s leaders have embraced coal-to-gas plants as part of the nation’s energy future.

Last September, facing a growing public outcry to ease smog, the government announced that development of the coal-to-gas industry would be sped up over the next decade. At least 18 plants have obtained initial approval for construction. Developers are seeking to build several dozen additional plants.

These plants have powerful support from the coal industry, which has been stung by China’s economic slowdown and plunging prices. The plants also are promoted by regional governments, which often are involved in lucrative land development deals and are eager to develop new jobs. 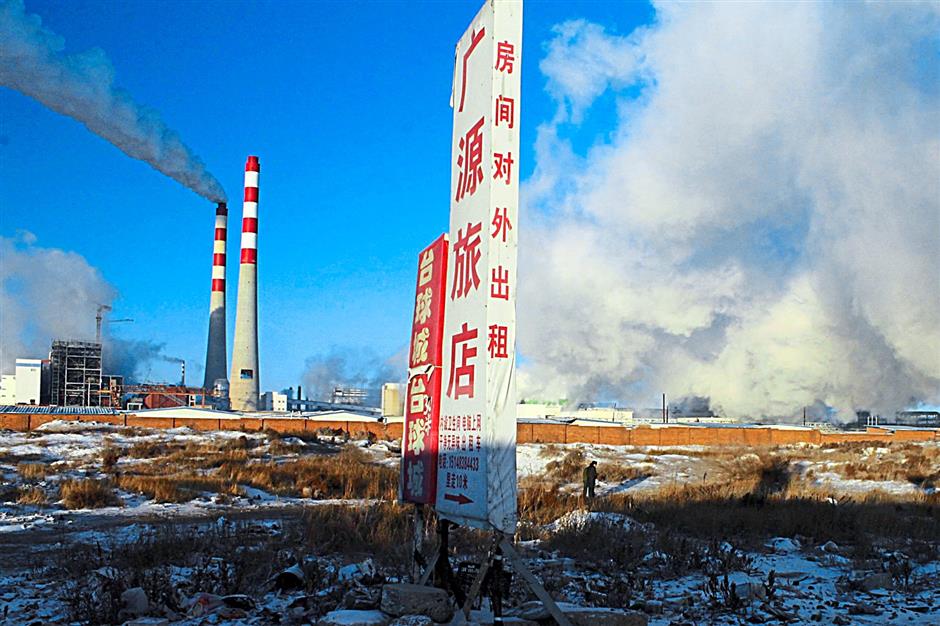 This coal-to-gas plant built by Datang International is the first of its kind in Inner Mongolia. It creates methane that can be piped to Beijing, where it can be used as a cleaner burning fuel to reduce air pollution. But the plant itself can send out quite a stench.

Before the advent of electricity, there was a long history, both in China and the West, of turning coal into a crude “town gas” to light street lamps. But turning coal into a more refined methane gas is a more complicated process and there have been some early stumbles in the development of this technology. To produce the methane at Hexigten Qi plant, the coal is fed into large pressurised vessels where it is combined with steam. The resulting gas then is sent through a series of purifying columns. The Hexigten Qi plant is operated by Datang International, a state-owned power company. The plant is one of two such facilities that opened in the last year.

The first phase of the plant began operating in December. It quickly shut down in January and did not start up again until this spring because of corrosion problems, according to Chinese news reports. At full capacity, the plant is supposed to produce some four billion cubic meters of natural gas annually – that’s more than 40% of all the natural gas consumed in Beijing in 2012.

Workers at the plant are housed in new dormitories on a campus just inside the front gate. Meals are served by white-hatted chefs, and a recreational centre offers badminton and ping pong.

The plant is forecast to eventually provide some 1,500 jobs. Shang, a 49-year-old coal miner, found temporary work at the plant as a janitor. He pronounced his job “fabulous”, with wages and living conditions far better than anything he had ever experienced.

But these jobs carry risks. In case of toxic leaks, Datang has built an evacuation centre for workers. In January, shortly after the plant opened, industrial “poisonings” killed two and hospitalised four others, according to Xinhua Inner Channel, a Chinese news service. 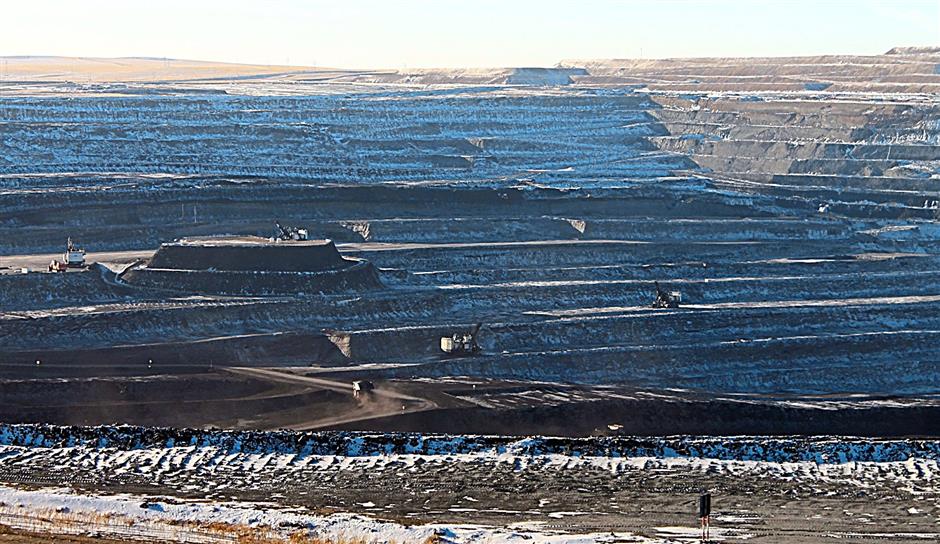 China’s reliance on coal has drawn concerns over the nation’s carbon footprint. This open-pit mine in eastern Inner Mongolia, operated by the Shenhua Group, is nearly 1.6km long and has three opened seams of brown lignite coal.

During the past decade, energy development has turned Inner Mongolia into China’s largest coal-producing region, bringing new prosperity and stirring tension. Xilinhot, a mining hub north of the Datang plant, has a huge sports centre and six-lane boulevards framed by neon archways that light up at night like Las Vegas.

But some ethnic Mongolians have been pushed off grazing lands as mines, roads and industrial plants encroach on grasslands where herds of cattle, sheep and goats once roamed.

Mongolians are now a minority in a region of some 24 million people dominated by the Chinese Han. Yet, their heritage still defines the region, hearkening back to an earlier era when their armies conquered much of Asia. A statue of Genghis Khan, not Mao, rises in a downtown plaza of Xilinhot. Among Mongolians, there is plenty of mistrust of the government and the coal boom it has encouraged.

Three years ago, a 35-year-old Mongolian herder named Mergen was killed by a coal truck as he joined with others to protest the impact of mining on their lands outside of Xilinhot. His death prompted thousands of herders, students and others ethnic Mongolians across the region to take to the streets in rare demonstrations that evolved from anger about Mergen’s death to broader frustrations with the toll of mining on traditional lands.

“It (the protests) really got huge,” said a man who was a high school classmate of the trucker. “The protesters were so furious that they tried to drive to Beijing carrying the dead man’s body. But the government blocked the road.” The trucker was eventually executed, as the Chinese government sought to calm the unrest.

The regional government has reached out to herders, both Han and ethnic Mongolian, with programmes to improve worn-out pasture lands and compensate them for the loss of grazing rights to development.

“It used to be when the government wanted something, it would just take it,” said one Inner Mongolian official. “But now there are payments. It is how the government shows its humanity.”

For some, the cash payments don’t make up for the potential risks of living near a coal-to-gas plant. “Every time I smell it, my head just aches. And my mother, she pukes,” said Yanan Zhang, who raises cattle, horses and sheep on nearby lands. “We aren’t being compensated for that. Nobody really knows whether it might be harmful to us.”

Other herders appear to favour the development. On a bitterly cold day during the start-up trials at Datang plant, Li Liansheng grazed his cows on a patch of land near the front entrance. “They only take a little of our land, and this is good for the economy,” he said. “We used to have no electricity. Now we have electricity, and the transportation is much better.”

In the months ahead, Datang’s troubled start-up will be monitored by Chinese government officials eager to learn more about the technology and economics of turning coal into gas. China’s environmentalists still hope the government will back away from green-lighting an industry that emits so much carbon.

The coal industry, however, is eager for new markets. Last year, the Datang plant began buying coal from a mine at the edge of Xilinhot that was struggling with the first downturn in sales in a decade.

Despite pollution, carbon emissions and climate change, Cheng Xiaoliang, the mine’s vice general engineer, is confident about the future.

“I firmly believe that coal is going be the main generating source of energy at least for the next 50 years,” he said. “No matter what, China still needs coal.” – The Seattle Times/McClatchy Tribune Information Services