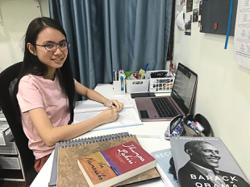 A feather in her cap: Mae holding up the certificate in recognition of her Gold Finalist achievement at the QCEC 2020.

WHEN she was younger, Mae Chew was apprehensive every time she sat for her English language written examinations.

Her essays were either incomplete or filled with crossed-out sentences as she struggled to find the “perfect” words or phrases to convey her ideas.

The 16-year-old has since broken free from the shackles of self-doubt. Last November, Mae bagged the Gold Finalist award at the Queen’s Commonwealth Essay Competition (QCEC) 2020, which saw the participation of 13,000 students from 58 countries.

It was the highest accolade awarded at the annual event, known to be the world’s oldest international writing competition for schools.

“It filled me with a sense of elation and fulfilment. Not only was this my first fiction submission to a writing competition, I was cognisant of the number of entries vying for the top prizes, and that approximately only 1% of participants would receive the Gold Finalist award, ” said the A-level student from Sunway College in Subang Jaya, Selangor.

In her entry to the competition, themed “Climate Action in the Commonwealth”, Mae wrote a short story and titled it Things I Do Not Know.

“It revolved around sensitive themes such as child marriage and rape. The inclusion of these themes was to highlight the larger implications of climate change that are not limited to environmental impacts, ” she said.

As a self-declared advocate of educational equality, political participation and climate action, these issues are close to her heart, so much so that she strives to advance her civic and diplomatic engagement through her passion for writing.

“I currently serve as a contributing writer for the KSI Strategic Institute for Asia Pacific, and am the director of the Malaysian Youth Diplomacy’s research article blog as a member of the executive committee, ” she said.

Besides her QCEC win, Mae has a string of accomplishments under her belt. In 2019, her research paper on ethnic politics earned her the Gold Key Award – the highest possible accolade for entries competing in the International Writing Region-at-Large division of the Scholastic Art & Writing Awards.

Recently, she was named the WWF-Malaysia Eco-Champion for her project proposal on river conservation.

On how she overcame her self-doubt in the early days, Mae said: “I have gained confidence over the years by persistently reading, writing – be it articles, research papers or short stories – and engaging in critical analysis of successful works.”

This year, the aspiring social entrepreneur is starting out as a participant of The Star’s BRATs Young Journalist Programme.

“I look forward to furthering my writing endeavours and seeing more of my work in print. The fulfilment one gains from being able to share one’s vision and voice through the written word is wholly immeasurable, ” she said, adding that she remains “as avid as ever for growth”.

The accomplished teen has also shone bright in competitions outside of the writing realm – most notably emerging as regional and national champion at the 2018 World Scholar’s Cup, an international academic decathlon.

When asked if she will be taking part in this year’s QCEC, which was launched by the Royal Commonwealth Society vice-patron, the Duchess of Cornwall, on Feb 24, Mae had this to say: “I hope to! While this year will be rather hectic for me – in terms of both my academic endeavours and extracurricular activities – I find the 2021 topics under the theme of ‘Community in the Commonwealth’ rather compelling to explore.”

Open to all Commonwealth citizens aged 18 and under, the QCEC is a platform for students to share their ideas on key global issues, while recognising youth achievement and developing key skills through creative writing.

The closing date for this year’s competition is June 30. For details, visit www.royalcwsociety.org/the-qcec.