Lim (middle) receives a rapturous welcome at the Limkokwing University in Sierra Leone on his arrival.

IT’S a record for a Malaysian educationist, probably even the world, to single-handedly set up seven universities in Africa – and Tan Sri Lim Kok Wing has done just that.

What’s more, this is not the end of it as the 73-year-old continues his African journey, one which many other businessmen still have lingering doubts about, coupled with a deep hesitance when it comes to putting money in the continent.

But Lim has placed his faith in Africa the last 15 years and has set up Limkokwing branch campuses in Lesotho, Botswana, Eswatini (formerly Swaziland) and Sierra Leone.

Come this month, three gleaming new campuses are set to open in Namibia, Uganda and Rwanda.

Paper work is also being done to see to the setting up of the South Africa and Nigeria campuses. It’s an important milestone for Lim, and he is excited to greet 2020.

“It’s a very proud moment for Malaysia. Limkokwing University is a Malaysian brand and remains the only Malaysian university to have branches around the globe.

“As part of our Brand Malaysia, the Jalur Gemilang is hoisted in every campus and graduates hold the mini version of our flag at every convocation, ” said the advertising guru turned educationist.

He is enormously proud of being a Malaysian and an ethnic Chinese, adding also that he did not compromise on the naming of his universities anywhere in the world, saying it has to be Limkokwing.

The university’s parent campus is the one in Cyberjaya, where more than 80% of its student population is international - foreign students from 150 countries.

It has branches in Melaka, Kuching as well as Cambodia, Sri Lanka and Britain.

Although the year is only about to start and many university staff are still on leave, it is a busy time at Cyberjaya.

His senior aides are busy briefing him in minute detail on various topics ranging from the number of billboards put up in the three African countries to queries received from prospective students as the campuses open for business.

There is almost an “electric” atmosphere at the university president’s floor with the deadline looming.

The senior management knows that history is in the making in Limkokwing’s African transformation plan with the next leap just about to take off.

The first African campus was set up in Gaborone, the capital of Botswana, in 2007.

“When we opened our doors for registration, 6,000 hopeful young people turned up for the 1,500 places available.

“The Botswana government invited us to set up the university within six months.

“Then, the country had only one university and the talk of having a second one set up had been going on for years.

“And here comes a Malaysian who achieved it within six months, ” he said, adding that the university went on to open its second and third campuses in Botswana.

The following year, Limkokwing opened in Maseru, the capital of Lesotho, with the aim of producing the same kind of graduates with skills and knowledge.

Lim activated the Laptop Empowerment Initiative to make it possible for every Limkokwing student to own a laptop – an unheard of plan in Lesotho then.

By 2010, the university opened in Mbabane, the capital of Eswatini, as news spread about the transformation in nearby countries with King Mswati III extending an invitation to Limkokwing to set up campus.

Four years later, another campus was added into the Limkokwing family, this time in Freetown, the capital of Sierra Leone but it opened its doors at a tough time as the Ebola virus had just hit the country.

“We faced a potential crisis but quickly came out with a response, banking on our skills to create a huge public awareness. After that initial lockdown, we created history in 2016, when more than 1,000 students began their semester.

History in the making

Fast forward to 2020 – the Ugandan campus will be the first private international university in the country, following an invitation to Limkokwing.

It was made after a visit by Second Deputy Prime Minister, Dr Ali Kirunda Kivejinja, to the Cyberjaya campus in 2018.

The programmes will be industry focused on skills, with emphasis on Technical and Vocational Education and Training (TVET). There are diploma and bachelor degree programmes on architectural technology, broadcasting (radio and TV), business management, information technology, software engineering and fashion design, among others.

The campus will be located on a 6ha piece of land in Namataba, where Limkokwing University has officially taken over the premises of the former Namataba Technical Institute (NTI) campus in Mukono District, Uganda, last year.

“The next plan is to have a bigger campus for post-graduate courses and eventually Limkokwing University programmes across the country of about 44 million.”

The students will be a mix of government-sponsored and private students.

Lim is excited with the opening of the Rwanda campus in its capital of Kigali. The country has attracted the attention of the world with its economy projected to hit 7.8% in 2019 and 8% this year.

Rwanda’s economy has undergone rapid industrialisation due to a successful governmental policy and since the early 2000s, it has witnessed an economic boom.

It is eager to shout about its success to the world and has even taken a £30mil (RM160mil) sponsorship with the Arsenal football club as its official tourism partner.

But its big show is in June when Rwanda hosts the Commonwealth Heads of Government Meeting (Chogm).

“We hope to use this special occasion to boost the presence of Limkokwing University in Kigali, to coincide with the Chogm Youth Summit.

“We have started operations for the campus to be set up and by April, the academic year will begin, with similar emphasis on TVET programmes.

“There is a hunger for education and the government is emphasising on education and skills development. It is a country in a hurry.

“In Africa, Rwanda has even been dubbed the Singapore of Africa. Malaysia hopes to play its part and Limkokwing is proud to play that role in the education sector, ” he said, pointing out that Microsoft has plans to set up a tech park in Kigali while China’s Alibaba is set to create Africa’s first digital e-commerce hub.

He pointed out that this was an entirely Malaysian direct investment by Limkokwing with no government sponsorship and student loans.

“Our target is 500 students, as a start, and the programmes include tourism management, as Rwanda has an international recognition for this with many job opportunities.”

This means that Travel & Tourism now account for 14.9% of the total Rwandan economy.

Revenue from gorilla trekking in Volcanoes National Park grew by 25% in 2018 to US$19mil (RM77mil) from the previous year, according to the latest data from the Rwanda Development Board. The money was earned from the sale of 15,132 gorilla permits during the year.

Limkokwing will also open its Nigerian campus in the state of Edo, known for its rubber and oil production. It has a population of five million people.

“We are the first 100% foreign-owned university in Nigeria, ” he said, adding that the university was invited to set up its branch campus there.

In 2017, the Governor of Edo state Godwin Obaseki visited the Cyberjaya campus as part of an introduction to its ecosystem of training industry-ready graduates.

In Windhoek, the capital of Namibia, Limkokwing will begin its classes next month with launches already in full swing.

The campus is being set up as a private university, offering similar TVET programmes.

In the pipeline will be the campus in South Africa, where Limkokwing has already identified a site in Warrenton, an agricultural town in the Northern Cape province of South Africa, situated 70km north of Kimberley. The town is named after Sir Charles Warren. Diamonds were discovered here in 1888 and mining still continues. It is known for its lush farmland and rivers.

“It is a picturesque place with a rural setting, and certainly has a conducive environment for studying.

“We believe that both the students and parents will like this place once it is ready. “

Lim says it was ironic that his African education journey had not started in South Africa, much as his love with the continent began in South Africa.

His friendship with the legendary Nelson Mandela is well-documented including how he spent two years from 1993 working with Mandela and the African National Congress in the run-up to the first free elections.

Lim played a phenomenal role in shaping and directing the Mandela campaign following the recommendation of then (and present) prime minister Tun Dr Mahathir Mohamad to get Lim to use his experience and skills.

Thus began a love affair with Africa that has not abated but has been reinforced over the years.

“I see Africa as an exciting continent of boundless untapped potential. I also believe that youths should have access to education in today’s globalised world.

“Education will change their lives. No young person should be denied the transformative power of a great education.”

A book, “Limkokwing: Transform Africa” about his African journey is slated to be launched by the middle of this year. The 345-page book traces his involvement in South Africa and the subsequent education journey in the continent.

“I look forward to 2020 as it is a year of expansion in Africa and the next stage of my journey in the continent that I love so much.”For Lim, the university expansion isn’t just about setting up campuses and producing graduates but about transforming the lives of young Africans.

“It is a mission to change these young people into confident, skilled and techno-savvy individuals who can contribute to building their country’s economy.

“Education is the key and all these countries depend on this human capital to spur economic growth, with the proper skills and training.”

Lim does not believe in the conventional academic teaching, saying he believes that students should have creativity and innovative skills.

Like him or loathe him, he is without doubt the Simba or the lion king of private education in Africa. And he remains the only Malaysian to have achieved that feat. 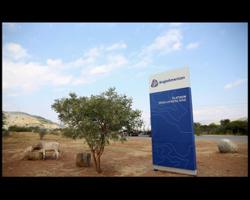