Lining up and showing respect to teachers are good values that must be instilled from a young age (file pic).

TUN Dr Mahathir Mohamad is impressed by how Japanese children look after the environment and the cleanliness around them.

And, he wants our students to emulate them by having good values, being considerate of others and contributing to the well-being of society, through the learning of Civics Education.

Education Minister Dr Maszlee Malik who was with the Prime Minister on Aug 13 when Civics Education 2019 was launched in Putrajaya, said a new module, concept and approach which emphasised literacy and practical teaching, has been implemented in schools nationwide since June.

Civics was previously taught as a subject, but it has now been integrated into other subjects so that children would learn integrity, honesty, hard work, discipline, the dangers of bullying and respect for each other’s differences.

While there are modules and manuals on how Civics is to be taught in schools and incorporated during assemblies and activities, teachers are given space to implement it creatively to mould Malaysia’s schoolchildren into individuals who are responsible, have high moral standing and can play their role in society. Dr Mohamed: The government wants us to re-emphasise the importance of civics and to see how we can do it differently and achieve better results this time.

> How did the idea to introduce Civics Education come about?

Civics has been in our curriculum all this while but the objectives weren’t met. The government feels that our national schools should produce better quality Malaysians for the country’s future by teaching them responsibility, hardwork, integrity and proper money management from a young age. The government wants us to re-emphasise the importance of civics and to see how we can do it differently and achieve better results this time. We talked about how civics could be put back into the existing curriculum without interrupting the school curriculum because we did not want to cause any massive changes to school timetables by introducing a new subject. We had a series of meetings with partners and with their input, we came up with a module and identified four subjects to implement it. The Malaysian Anti-Corruption Commission, police, Health Ministry, Environment and Climate Change Ministry, Suhakam (Human Rights Commission of Malaysia), Election Commission and Youth and Sports Ministry were involved in helping us develop the module. Before developing the curriculum, we envisioned the kind of school leavers we wanted to produce, not just in terms of academic knowledge, but in skills and values. It normally takes two to three years to develop a curriculum but Civics Education only took us six months because it isn’t something new. We just needed to fine tune it and align it to current issues.

> How is the new module applied in each of the subjects?

We’ve come up with topics such as corruption, how to live as a tolerant society, financial literacy and the environment, for the subjects based on four core values – love, mutual respect, responsibility and happiness. In Moral or Islamic Education for example, teachers may focus on corruption which can be linked to religion teaching us not to be a corrupt society. In English, teachers can talk about keeping the environment clean, and in History, students can be taught to respect each other. Teachers can link this to a period of our country’s history to show the connection to students. Civics can also be indirectly taught in other subjects. For example in Science, while conducting activities in the laboratory, the teacher emphasises the importance of cleaning and putting back the equipment in the right place. Teachers need to be good at finding space to consistently incorporate civic values in every activity and by emphasising student practices. Teachers also act as exemplars to the disciples. Civic-conscious teachers are examples students can emulate. This continuous practice of civic values can be a culture among students. All these happen in the classroom but we’re working with Parent-Teacher Associations (PTA), communities, government agencies and the private sector and we’re re-looking how Civics Education is taught to ensure that students practise it outside of school because we found that they don’t apply what they learn in real life. 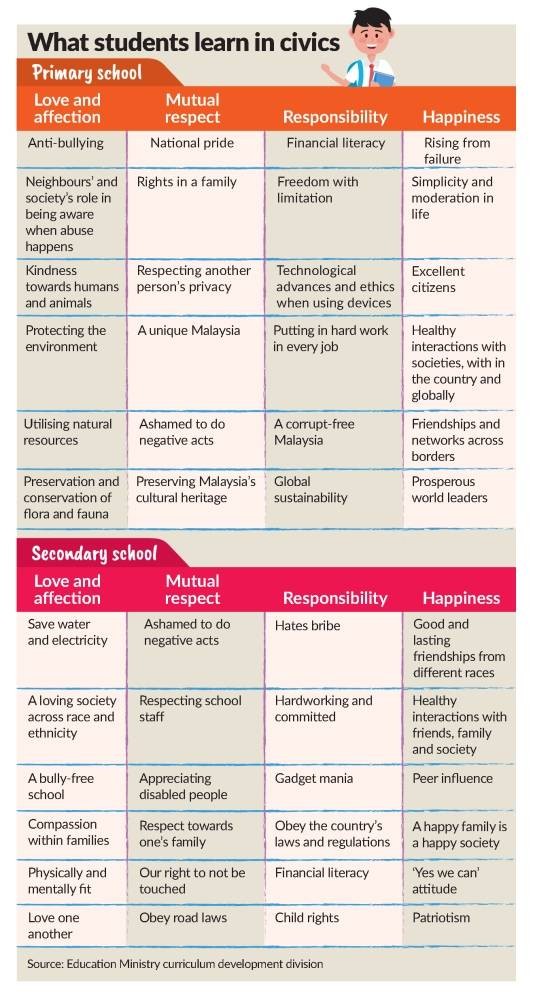 > How is Civics Education implemented outside the classroom?

During co-curricular activities, if mutual respect is the theme for that particular week, it can be applied through games – for example how to follow instructions and play in a respectful way against an opponent. We may not be able to monitor individual students but teachers have been trained to look into these things. Peer support is very important as friends can correct each other. We’re also looking at how communities and companies can help in school programmes. We’re also reaching out to parents because schools cannot do it alone. If a child has a good upbringing, schools only need to reinforce and teach the values. When instilled at a young age, good values will become a norm by the time they leave school. Things like queuing up for public transportation, giving up their seats for pregnant women and flushing public toilets, will be part of their culture. Some examples of outside classroom projects conducted jointly with other ministries, government departments and NGOs, include road safety, financial literacy, and eco-friendly programmes.

> Will students be assessed?

For now there won’t be any form of assessment because this is supposed to part of instilling values in children. We are in the midst of developing some kind of tools to ensure its future effectiveness.

> Why do we need Civics Education?

We must look at the kinds of students we want to produce – the big picture. We don’t want students who are academically good but behave in an undesirable way. We don’t want a young generation that have no respect for the environment and cleanliness, are not committed to their work and have no integrity.

Society has to do its part