Caiyen (left) and Caysen working on their Kumon worksheets at the centre. (Right) Ganapathyiyer picking worksheets for her students.

CHILDREN are getting the chance to explore their potential, and do it independently at Kumon centres.

For brothers Chen Caiyen, 10, and Chen Caysen, seven, their parents have been sending them for Kumon classes since they were five.

Their mother Vivian Tan Sill Ming says she sends both her boys for Kumon classes because she wanted them to learn how to study independently.

“They can do the work by themselves and this has become a habit for them,” says the working mum.

She says having her sons complete their school work before she comes home frees up the nights so that they can spend quality time together.

The Kumon method began in 1954 in the home of Toru Kumon, a high school mathematics teacher, who wanted to improve his son, Takeshi’s mathematics test results.

Believing in the concept of self-learning, he created many different mathematics worksheets to make it possible for Takeshi to progress on his own. 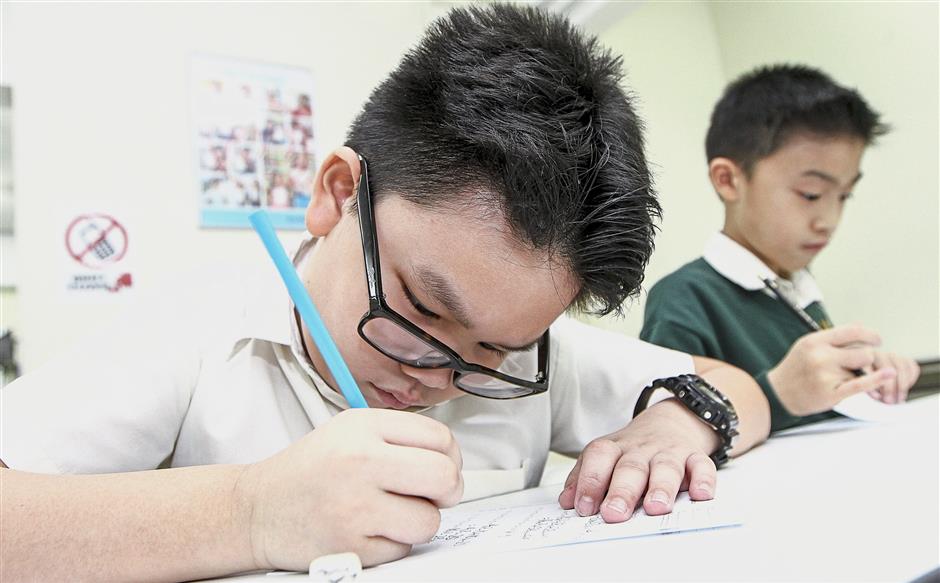 Caiyen (left) and Caysen work on their Kumon worksheets at the centre.

Takeshi quickly developed his calculation skills and was able to do complex differential and integral calculus when he was just a few months into the sixth grade.

Seeing the success with Takeshi, Toru invited some children from his neighbourhood to learn the method.

Word about the method spread and in 1958, he established an office in Osaka, Japan, to open more learning centres. Today, more than four million students have learnt the method worldwide.

Placing great importance on the abilities of each student, Kumon aims to enable each individual to become self-learners.

Both Caiyen and Caysen attend classes every Tuesday and Thursday.

On other days, Tan says they spend their afternoons completing their Kumon worksheets and homework on their own without the need to nag them about it.

She also strongly believes the classes built Caiyen’s confidence as he was a very shy boy before he started lessons.

Now, he goes around helping the others in class.

The Kumon lessons in mathematics and English have also benefited her boys in school.

Both of them say they find it a breeze to tackle mathematics questions.

Their Kumon instructor Danalekshmi Ganapathyiyer says Kumon students would not get any help from the instructors until they have taken the time to analyse and attempt the questions in the worksheet on their own first.

Self-learning is a key characteristic of this method.

“They have to learn, master and then move (to the next level) at their own pace,” she stresses, adding that there is no competition in class.

Students will finish their worksheets on their own before leaving it in a designated box and files in class.

Once the instructor has marked the worksheet, the students will have to identify their mistakes and do the corrections themselves.

This also helps them take ownership of their work.

“We have to use different approaches with different children,” she explains.

She says that if a child is shy, instructors will encourage the child to come out of his or her shell.

“We use a ‘just right’ level in the study concept,” he says, explaining that the starting point for each Kumon student is determined individually, regardless of their grade at school.

It is common to see students from the same level in school doing Kumon worksheets of different levels in class, he adds.

By doing the worksheets, Sugawa says that students also improve their self-esteem.

“The feeling of ‘I can do it’ is very important here and when they progress from something easy to one that is more difficult, it cultivates a sense of achievement.”

He also says: “Through self-learning, these children grow more confident in their own abilities and can help their peers and guide them in their work.”

The learning enrichment programme has about 30,000 Kumon students in over 200 of its centres.

Sugawa hopes that there will soon be Kumon centres in Perlis, Pahang and Terengganu so that the children there can also benefit from this Japanese learning enrichment method.

In conjunction with its celebrations, Kumon Malaysia organised the National Instructor’s Summit 2018 and an Advanced Student Forum.

Although the national Instructor’s Summit is an annual event, this year they invited renowned speakers from the field of early childhood care and education.