TEACHERS are in a dilemma whether to reprimand students or ignore students who misbehave.

The Education Ministry’s permissible punishment guidelines which form the basis for teachers was last issued in 1983 and has more “don’ts” than “dos”.

The guidelines are in favour of the students when it comes to dealing with indiscipline.

Teachers who reprimand students have had bad encounters with some parents who have taken law suits. There are some who have even physically assaulted teachers.

The Cikgu Azizan case is a clear case of how a teacher was hauled up to the court for taking action against a child.

(On Oct 31, the teacher Azizan Manap better known as Cikgu Azizan, pleaded not guilty to a charge of slapping a male student for indiscipline, including being involved in glue-sniffing, bullying and playing truant. 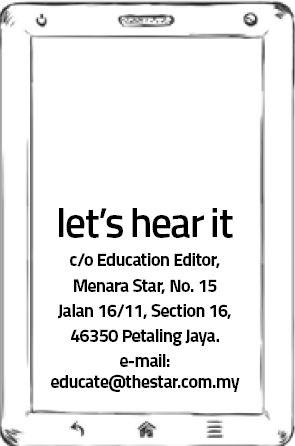 Charged under Section 323 of the Penal Code for voluntarily causing hurt, he faced a jail term of up to a year, a RM2,000 fine or both. Cikgu Azizan was later released on a RM500 bail.

A magistrate’s court subsequently decided to discharge but not acquit Azizan after the deputy public prosecutor said they would not be pursuing the case.)

Though the case was dropped, there is still no clear indication from the ministry as to what the school and teachers can do to children with such bad behaviour at school.

Teachers who ignore or turn a blind eye to students who misbehave are termed as teachers who do not care about the students’ well being.

Therefore either way, teachers get a bad name.

Teachers reprimand students in many ways – they are ticked off for misbehaving while others are made to do community service.

Students who are obstinate and recalcitrant, defiant and aggressive are usuallydealt with by the discipline teacher.

In the early days, teachers used the cane. In fact, the discipline teacher walked with with a cane in hand.

Today teachers do not carry the cane and it is used sparingly only by assigned teachers.

Only the discipline teacher or the school headhas the discretion to use the cane on the students for very severe breach of discipline.

Still, there are some quarters who are against teachers reprimanding students who misbehave.

Many parents are against the approach of using the cane to deal with difficult youngsters..

They want teachers to counsel and use other soft psychological approaches to discipline such children..

Somehow parents do not understand the severity and seriousness of student indiscipline in homes and schools.

Students of today are different from the students of recent decades. Many of them are bold, aggressive and violent.

Students today are more boisterous and rebellious in nature. They know about corporal punishment and aware of their rights.

Many parties have responded by calling for teachers and parents to show love.

They are of the view that more humane acts and counselling will transform them to law-abiding and loving schoolchildren.

But teachers have their own stories of indiscipline in some schools and their revelations would horrify most people.

I have seen trainee teachers who are sent to schools for their practicum break down in tears when they are unable to control primary schoolchildren.

European countries that have abolished corporal punishment are now facing a new kind of threat from rebellious and violent children called brat-ocracy.

Many teachers are suffering mentally and emotionally because of student indiscipline. Students have no fear of teachers. It is not easy to teach without proper class management.

No one is advocating that the teacher goes on a rampage by caning every student who misbehaves.

Caning is only to be used for students who have no fear of rules and who transgress the rights of other students.

Teachers today are dealing with far more threatening and violent behaviour among students.

It is for these blatant offenders that the school authorities should be given the power to wield the cane.

The widespread student indiscipline such as gangsterism, bullying, fights, violence and truancy are the symptoms of an educational system that needs to be revamped.

Most disciplinary problems can be traced to family problems and bad parenting. However schools do not have the time nor the resources to look into such details.If parents are made responsible for their children’s poor conduct and indiscipline, then corporal punishment can be abolished in schools.