No looking back: Susmita is thankful that she is in school now. – AFP

Helpless and with little support from the authorities and their families, girls who are kidnapped and forced into marriage, face a bleak future in this Himalayan nation.

ON a freezing night three years ago, 13-year-old Susmita Kami sneaked out of her husband’s house and didn’t stop running until she reached the doorstep of her parents’ home in Nepal’s remote northwest.

Her escape from a forced marriage –s a tradition many teenage schoolgirls from the Himalayan nation’s Dalit community are expected to uphold -- was soon under threat.

But Susmita’s parents resisted demands from her in-laws to send her back, deciding to stand by their pleading daughter who desperately wanted a better life.

“I told them I never wanted to get married and I wasn’t going back. I ran away because I wanted to stay in school,” says Susmita who just turned 16.

Although Nepal banned child marriages in 1963, four out of 10 girls are married before they turn 18, according to United Nations Children’s Fund (Unicef).

The figures are even higher among the country’s impoverished Dalits or “untouchables” who live in remote communities shunned by the mainstream, meaning their customs go largely unchallenged. Supportive parents: Susmita is thankful that her parents (left) resisted demands from her in-laws to send her back. - AFP

Three out of four Dalits marry in their teens or even earlier, according to a 2012 survey by Plan International, Save the Children and World Vision. Girls are often abducted by prospective grooms in a cultural practice few families object to.

Susmita was kidnapped while collecting firewood and forcibly married four days later – an ordeal also endured by her mother, Jadane Kami, when she was in her early teens.

“This is our culture. People worry that otherwise our girls will elope or marry into other communities,” says Kami, who initially did not oppose her daughter’s forced marriage.

The tradition has survived a 10-year civil war, the end of Nepal’s royal rule and the nation’s transition to democratic politics.

In Simikot, headquarters of the remote Humla district that borders the Tibetan plateau, Dalits live in segregated settlements.

Their hay-topped homes stand in stark contrast to the shiny tin roofs of houses belonging to higher-caste Hindus and Buddhists.

“Dalits have struggled due to their low caste status. A hard life: Sunar’s house on the top floor is basic and she constantly worries about managing the household with her husband’s meagre income. - AFP

For centuries, they were not allowed to mix with others at all,” Humla’s deputy district chief, Bam Bahadur says.

“Naturally, this has left them very isolated, they are still following old customs and change has been slow to come,” he says.

Dalit families also labour under huge financial strain, officials say, with children pushed to leave school and start work while their parents eke out a living as subsistence farmers.

The oldest of seven children, Dana Sunar was 14 and had been the only Dalit girl in her class then. The others had all dropped out, many abducted and forced into marriage. Sunar dreamt of staying in school, graduating and becoming a schoolteacher.

“I cried and cried. It was like a door had closed before me, all the dreams I had were shattered,” says Sunar who’s now 18.

Her in-laws pressured her to drop out of school and focus on farming and housework. Now a mother to six-month-old twins, Sunar describes her new life as “a daily struggle”.

“We never have enough money – sometimes we eat only once a day. I don’t know how I am going to bring up my children,” she says. 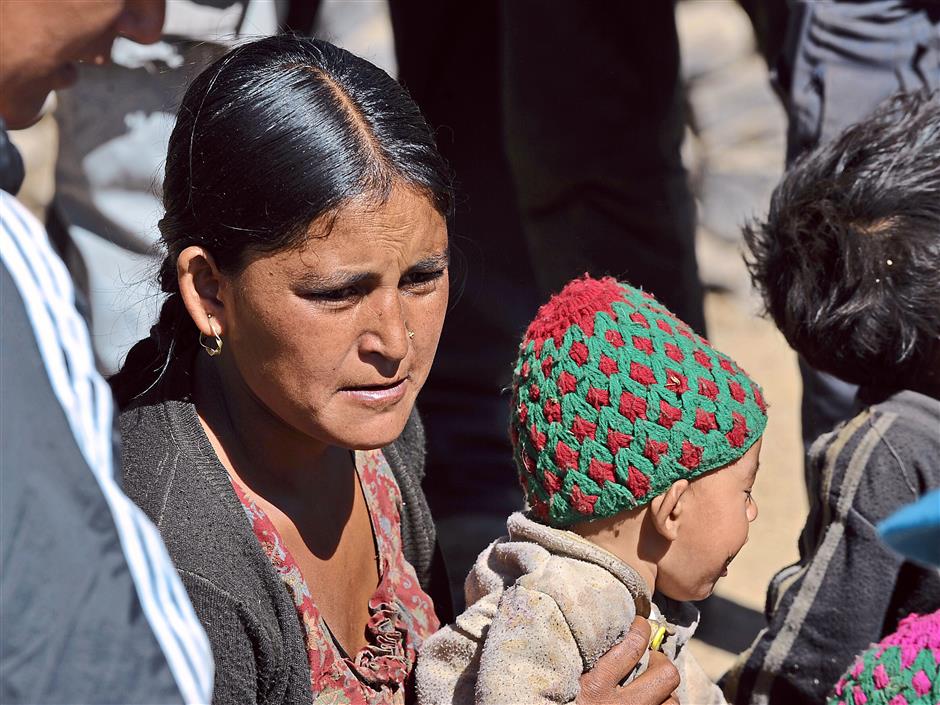 Broken dreams: Sunar’s aspirations of wanting to become a school teacher were dashed after she was forced into a mariage.

Experts say the consequences of marrying so young is so devastating.

“Adolescents have children early, they are unable to focus on education ... and both mothers and babies end up with health problems,” says Kunga Sanduk Lama, a government official who works on child rights.

Laws are ineffective, he says, citing a lack of evidence such as documents, photos or witness testimonies, which are needed to prove a marriage took place. In such situations, punitive action cannot be pursued.

Instead, campaigners focus on raising awareness through radio shows, street plays and after-school clubs for children.

Those who have fallen victim to the tradition need no convincing. Susmita, now in ninth grade, says she wants to see an end to “this terrible custom”.

Her father, a cobbler who earns US$80 (RM285) a month, says that sending her to school is a struggle.

The cost of her uniform alone is expensive, but for now, her family will do whatever they can to keep her in class. “I want my daughter to have a chance to stand on her own feet,” says Susmita’s mother.

“I think she did the right thing by running away. She is braver than I am — I never felt like I had a choice in the matter.” – AFP