Consider being a dietician 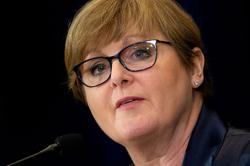 IN MALAYSIA, dieticians remain in short supply for several reasons, one of which is the limited resources for students to find out more about the career.

To remedy the lack of awareness, Taylor’s College Subang Jaya invited National Heart Institute's chief dietician and senior manager of the dietetics and food services Mary Easaw-John to speak to their pre-university students on the Prospects of Pursuing a Career in Dietetics.

Easaw-John is the first Malaysian dietician to receive the International Dietetic Network STAR Award bestowed by the American Overseas Dieticians Association (AODA) for 2005-2006.

According to Easaw-John, dietetics is best suited for those who have a passion for food and a compassion for taking care of patients.

“Most Malaysian dieticians are working in hospitals. Some are involved in food and pharmaceutical companies, with a few in private practice.

“Nevertheless, the prospects of employment is getting better, with 10 to 15 dieticians in one hospital today,” said Easaw-John.

Easaw-John added that while Malaysia was moving towards recognising the importance of dietetics, women continued to form the bulk of dieticians.

“Nevertheless, I hope to see more men taking the initiative to pursue a career in dietetics, as it is a rewarding profession,” she said.

More than one third of Taylor's students pursuing their first year of the Bachelor of Biomedical Science programme would be continuing their studies at the University of Newcastle, Australia, in the Bachelor of Nutrition and Dietetics. The good news is that a large number of the students are male.

The college's chief operating officer, Anucia Jeganathan, said visits from practitioners like Easaw-John was a good opportunity for students to be exposed to the world of dieticians.

“We hope students will be encouraged to follow in Easaw-John’s footsteps,” said Jeganathan.

The college students have an opportunity to pursue Dietetics via the Bachelor of Biomedical Science, a three-year programme offered in partnership with the University of Newcastle, Australia.